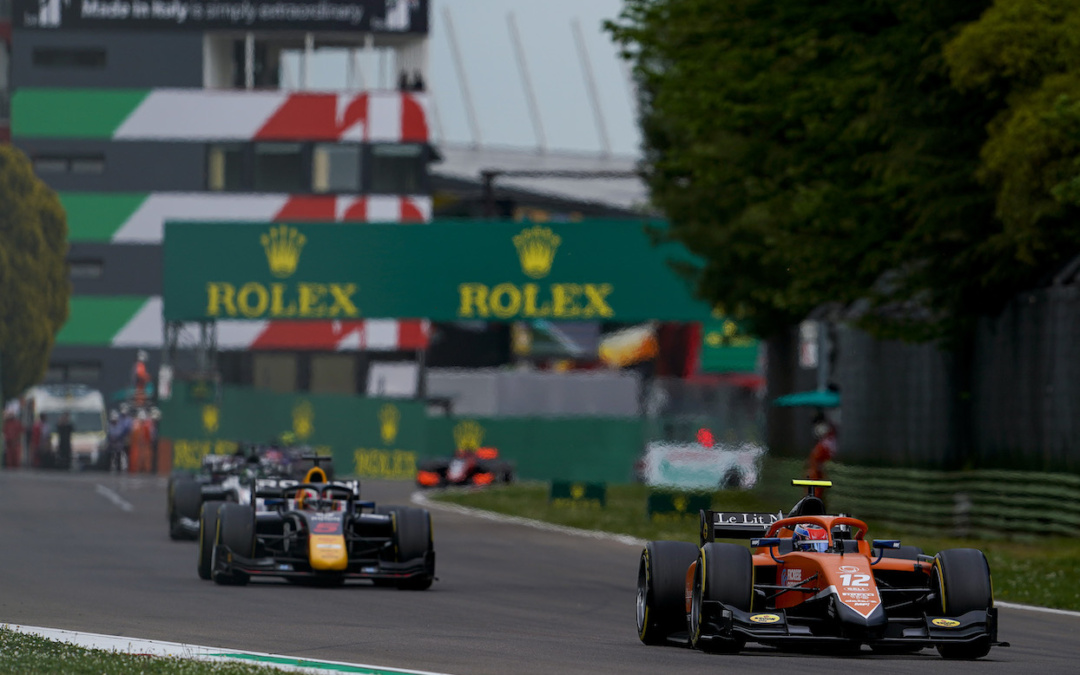 FIA Formula 2 returned to racing this weekend, heading to Italy and the legendary Autodromo Enzo e Dino Ferrari in Imola – seeing the first time F2 would race on the circuit. Fresh off the last Official Test of the season, where Clément Novalak logged nearly 800 km of valuable data in Barcelona, the young Frenchman arrived into Italy eager to utilize the knowledge gained with his engineers to collect his first points in the Championship.  Adverse weather on Friday meant limited running time to dial-in his MP Motorsport car, however Clément was able to maximize his weekend when it mattered most.

Friday brought rain and treacherous conditions to the circuit, which delayed the start of free practice by 3 hours.  Clément finally made it out on the circuit and was midway through his first flying lap when a car went off and brought out the first of 3 red flags.  After a 10-minute delay, Clément wasted no time and set a lap which was good for 5th fastest, when another stoppage put him back in the pits.  7 minutes later, the Frenchman headed back out on track with hopes to further dial-in his car, improving his time by over 2.7 seconds on only his 2nd flying lap.  The weather didn’t improve, and another driver went off the circuit, bringing out the 3rd red flag and the end of free practice.  Clément returned to the pits after only completing 2 flying laps, finishing the session with the 4th quickest time.

The rain didn’t let up, which delayed qualifying by over three and a half hours.  Dusk was fast approaching as the session started, with the track temperatures being only 13.5 degrees – the coldest of any session this season.   Clément burst out of the gates on his first flyer, topping the timing sheets with purple sectors 1 & 2 and a lap time of 1:44.489.  He improved by over a second and a half on his second lap, still remaining at the top of the field.  The track continued to improve as it dried, with a red flag waiving 8 minutes into the session.  Once the track was cleared, Clément headed back out on track, improving his time to 1:42.364, then another red flag waived, sending him to the pits to change his tires with 15 minutes to go.  With fresh tires, Clément headed back out on track with just 9 minutes remaining.  On his first lap out, he improved his time to 1:41.173, which would ultimately be his best lap of the session, and 13th quickest.

Saturday afternoon brought clear and sunny skies, seeing Clément start from 13th on the grid.  Looking to be aggressive to move up the field of the sprint race, Clément was eager to for the lights to go out. A rapid start saw Clément making progress through the first few corners, when the driver in front spun and collected the front wing of the Frenchman, sending him to the pits to repair his car while under yellow.  When he got back out on track, Clément was in P19 as the green flag waived.  The race remained clean for the remaining laps, however Clément wasn’t able to make progress, finishing 19th and wanting more for the feature race on Sunday.

The sun was shining for Sunday morning’s 35 lap feature race, with Clément starting on the super soft tires, where half of the drivers in front were on the alternate strategy with medium tires.  As the lights went out, Clément was able to maintain his position by narrowly avoiding an incident, which brought out the safety car after only the first few corners of the race.  At the end of lap 4, the race briefly went green again, seeing Clément improve to P12 when another yellow flag waived, bringing the safety car back out.  Clément’s engineers decided to call him into the pits to change to the medium tires, where he was able to exit the pits only losing 2 positions to P14.  Lap 10 saw the race go green, when an epic battle with the driver behind ensued, seeing Clément stay ahead for 3 laps as DRS was enabled.  The Frenchman’s race pace was very strong, keeping within a half second to the driver in front, all the while keeping the attacking driver behind him for the next 10 laps.  The drivers in front who didn’t change their tires started to trickle into the pits starting on lap 26, seeing Clément’s track position continue to improve.  By lap 32, the Frenchman was biding his time in P7, waiting for the right moment to make a move on the driver in front.  Seeing his opportunity, Clément dove down the inside in spectacular fashion, securing P6 just before a yellow flag waived due to a clash further behind in the field.  With the safety car out for the third time, 2 more drivers in front needed to make their required pitstop, seeing Clément climb to P4, where he would ultimately finish the race under yellow.

A finish just outside the podium with a reward of 12 Championship points is a breath of fresh air for Clément after a difficult debut on his road to F1.  The Frenchman is feeling more confident with his MP Motorsport car as he continues to improve the pace with his engineers.  FIA Formula 2 heads back to Spain for Round 4 of the 2022 Championship season from 20-22 May, seeing Clément tackle the Circuit de Barcelona-Catalunya.

“This is the best my car has felt all season.  We were able to put the knowledge gained at the Barcelona test into practice, and it is great to be rewarded with my first points in F2.  I’m feeling quite confident heading back to Circuit de Barcelona-Catalunya in a few weeks – it is a track I know very well, and with the steps we’ve made with the car it should be a strong weekend for us.”