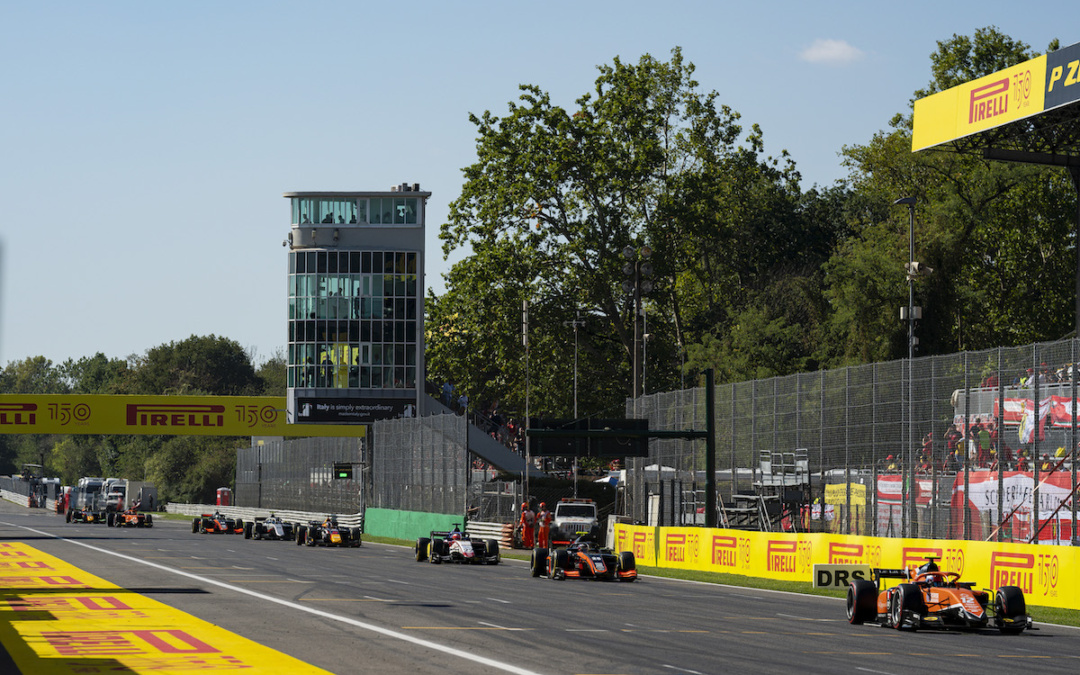 FIA Formula 2 closed out the European triple header over the weekend in Italy, seeing the legendary Autodromo Nazionale di Monza host the thirteenth & penultimate round of the 2022 Championship season.  Under sunny Italian skies for the duration of the weekend, Clément Novalak was primed to continue his run of scoring points in consecutive races after a 9th place finish in Spa & his first F2 podium last weekend in Zandvoort.

After rain overnight, Friday’s practice session opened up with the sun breaking through the clouds as Clément headed out on track for his reconnaissance lap, soon returning to the pits for ten minutes to let the sun dry the damp tarmac.  With thirty minutes remaining in the session, Clément would begin his push laps to work on the setup of his MP Motorsport car.  On his third lap, he would set a time of 1:35.569, immediately improving by over a second during his following lap as the track continued to dry.  Suffering from oversteer, the Rookie returned to the pits for fresh Pirelli medium compound tires and setup changes to improve the feel of his car.  With seven minutes until the end of the session, Clément surged out of the pits for his final two push laps.  He would set a rapid first sector, but would suffer with traffic in sectors two and three.  On his final push lap, the Frenchman would find time in sectors one & three, improving his time to 1:34.249, finishing twenty-first quickest for the session.

The sun would continue to shine for the rest of Friday, seeing Clément waste no time getting out on track for the early evening’s qualifying session.  Setting a blistering first sector and quick second sector, his first flyer would be good for P7.  On his second lap, he would find seven tenths, but continued to suffer from oversteer and would head to the pits for further setup changes and fresh Pirelli soft compound tires.  With just six minutes until the chequered flag would wave, the Frenchman bolted out of the pits to attack the end of qualifying. He would not improve on his first push lap, but on his final flyer the Rookie would set personal best sectors one & two.  On pace for a blistering final sector, a driver in front crashed into the wall bringing out yellow flags, and a disappointing end to Clément’s day.  His best lap of 1:33.345 would only be good enough for an agonizing P21.

Saturday evening’s sprint race would be a chaotic one for the Frenchman.  As the lights went out, Clément would surge forward and pick up three positions before the first corner.  His charge ahead would be halted when and incident would deploy the safety car, seeing Clément in P18.  On lap four racing would resume, seeing Clément begin a tight battle with the driver in front for multiple laps.  During lap seven, the Rookie made his move for the overtake on the outside of turn four, but was pushed wide with contact puncturing his tire and breaking his front wing.  The other driver would ultimately be penalized after the race stewards deemed him fully responsible for the incident.  After limping back to the pits, it was decided to retire the car, ending the Frenchman’s race.

Sunday morning’s feature race would see Clément opt to start on the alternate strategy with Pirelli medium compound tires.  After another lightning start as the lights went out, the Frenchman had already gained two positions going through turn two when chaos ensued.  Multiple incidents would bring out the safety car before the field was halfway through lap one, seeing Clément in P13.  Racing would briefly resume on lap six when a driver would hit the wall the following lap.  As the safety car was deployed, MP Motorsport boldly called the Frenchman into the pits for his mandatory pit stop and tire change – a decision that would pay dividends.  Rejoining the field in P11, other teams followed suit and would send their drivers into the pits, seeing Clément move into P7.  Race control would then suspend the race with a red flag to repair the barriers on lap ten.  After a delay of ten minutes racing would resume, and Clément would have to manage his tires for twenty laps.  The Rookie would face multiple battles during the first few laps after the race restarted, leading to a front-wheel lock up and an excursion over a sausage curb on lap sixteen.  Losing out on two positions, his race quickly turned into one of preserving position to secure a point-finish.  For the following ten laps, Clément would battle rapidly fading tires as he struggled to keep pace with the pack in front.  On lap twenty-six would the leader finally made his mandatory pit stop, with the Rookie moving into P9.  The following four laps would see Clément hold off a fast approaching challenger on fresh soft tires as he crossed the finish line.  Two Championship points was Clément’s reward after a valiant effort Sunday morning – continuing an impressive point-finishing streak for the Rookie.

Clément Novalak’s weekend went from frustration to points, as bold strategy and determination pays dividends.  After three weeks of back-to-back races and a consecutive point-finishing streak, the Frenchman is looking forward to a long break before he goes racing again.  The 2022 FIA Formula 2 Championship heads to the United Arab Emirates in two months, seeing Abu Dhabi play host to the final round of the season from 18-20 November.

“I’m very pleased to have come away with points from Monza after an incredibly frustrating qualifying & sprint race.  MP had a mega strategy for the feature race, and we lucked out with the safety cars.  I’m looking forward to the long break before Abu Dhabi in November after these three long weeks of back-to-back racing in Europe.”