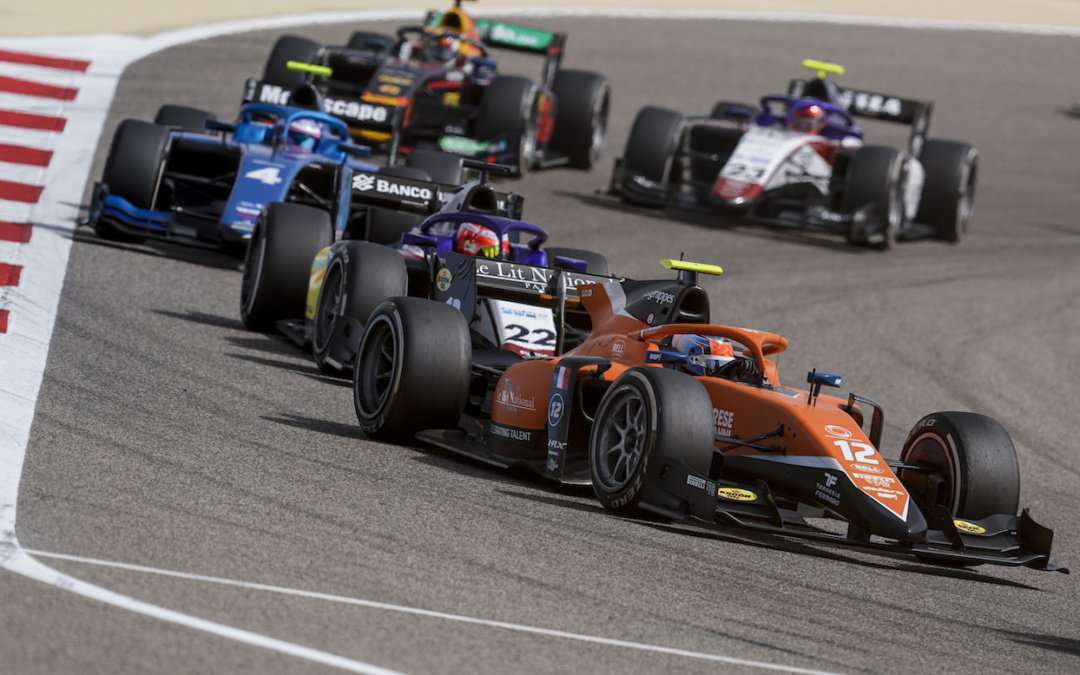 FIA Formula 2 headed to the Arabian Peninsula this weekend for the highly anticipated double-header to kick-off the 2022 championship season – stopping first at the small island kingdom of Bahrain, situated in the heart of the Persian Gulf. Returning to the Bahrain International Circuit just two weeks after clocking in 132 laps & over 700 KM during the Official Pre-Season Test, Clément Novalak was eager to start his first full-time FIA Formula 2 campaign on the right foot. Clear skies were a fixture over the weekend, however strong winds proved to provide an additional challenge for the F2 rookie and his Dutch outfit, MP Motorsport.

The winds were gusting early Friday afternoon as Clément hit the track for free practice & the first session of the season. Wasting no time getting up to speed, the Frenchman’s second flying lap lit the timing screen with two purple sectors and a time of 1:47.206. Feeling dialed-in with the pace of his MP Motorsport car, Clément and his team switched focus to race pace and longer-runs. Later in the session, focus returned back to the qualifying set-up of his car. With just over seven minutes remaining, Clément jumped to the top of the timing sheets with his quickest time of the session at 1:44.769, which would be good for 4th fastest of the session as the chequered flag waived.

Flood lights lit the circuit on Friday evening for qualifying, while prevailing winds continued for the entirety of the session. Clément headed out on track as the lights went green, aiming to get as many quick laps in as possible for the opening round of 2022. After his first flying lap, the rookie was sitting in P5 with a time of 1:42.178 while continuing to dial-in his car for more pace. Jumping into the pits for a set of fresh tires halfway through the session, Clément needed to find more time as his position had dropped to P14 as the track continued to improve. On his first quick lap out of the pits he was able to find over .300, however his improvement didn’t move his position up in the timing sheets, as Clément finished with the 18th fastest lap – setting his starting position from P18 on the grid for both races of the weekend.

The flood lights were on again for Saturday evening’s sprint race, where Clément was starting from 18th on the grid. As the starting lights went out, a driver further up the field had problems getting off the line, resulting in quick action from Clément moving around the slow-starter and into P16 by the exit of turn 1. Picking up two more positions as the 2nd lap began, Clément was having a great start to the first race of the season. The rookie secured P13 towards the end of the 3rd lap as the only safety car of the evening entered the circuit due to a driver stalled on track. After three laps under yellow, the safety car returned to the pits, and Clément immediately bagged another position to settle into P12, where he would remain fending off fierce competition from behind while trying to climb further up the field. On lap 15, Clément was going for an inside pass in turn 1, but his rear brakes locked & he clipped the driver in front, suffering a front wing failure. After pitting under the virtual safety car for a quick nose-change, Clément found himself in P18, where he would ultimately finish the race. A frustrating start to the season, however Clément clocked-in his fastest lap of the race on lap 19; showing strong race pace & excellent tire management for the entirety of the 23-lap sprint.

The sun was shining for Sunday’s feature race, seeing Clément start on hard compound tires from 17th on the grid as a driver ahead was forced to start from pit lane. As the dust settled after a hectic first lap, the Frenchman had claimed another position before a brief safety car was deployed due to a driver spinning further back in the field. Once racing resumed, Clément’s strong race pace held off any challenge from behind. Continuing his charge up the field, lap 9 saw the rookie dive down the inside of turn 1 to grab P14. Drivers began pitting on lap 11 for new tires, while Clément continued to expertly manage his tires, patiently waiting for the right opportunity to change to the soft compound tires. Clément was comfortably in P11 gaining on the driver in front, but midway through lap 13 a technical fault caused his engine oil temperature to overheat, and he was forced to retire the car with 20 laps of the feature race remaining.

Although the start of Clément’s 2022 F2 campaign yielded no point scoring finishes, his race pace & tire management are encouraging signs that this season will lead to solid results. Next weekend, the second round of the 2022 FIA F2 championship heads across the Arabian Peninsula to Jeddah, Saudi Arabia – where Clément is eager to bag the first points of his F2 career at the incredibly exciting Jeddah Corniche Circuit.

“Shame we couldn’t come away with any points from Bahrain.  The race pace was very strong, and I was on target to get a top-5 finish in the feature race before I had to retire due to a technical failure.  My car felt amazing, and I am looking forward to hitting the Corniche Circuit in Jeddah this weekend.”