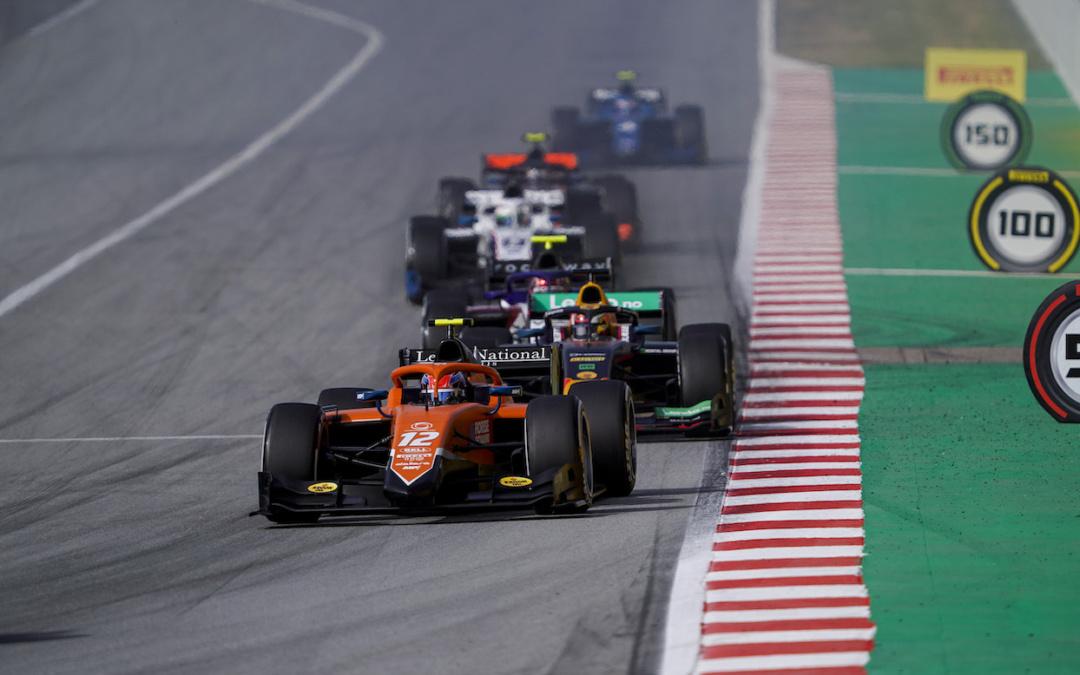 FIA Formula 2 was back in action this weekend, returning to Barcelona after an action-packed race in Italy last month where Clément Novalak scored the first points of his F2 career.  Clear, sunny skies were a fixture all weekend, with track temperatures hovering around 40 degrees Celsius – proving to be a challenge the Frenchman and his team, MP Motorsport were eager to take on.  Tire management proved to be key, and Clément was poised to utilize his knowledge gained during the beginning of his F2 campaign to score big points.

Free practice opened up the race weekend Friday afternoon, with a car bringing out a red flag immediately as the session started.  After a 10-minute delay to clear the car off the track, Clément headed out to gather much needed data to dial-in his MP Motorsport car.  During his out lap, another driver got beached in the gravel, bringing another session-stoppage which lasted for seven minutes.  With just seventeen minutes remaining in the session the track went green again.  On his first flying lap, Clément clocked-in a time of 1:32.561, and switched his focus to race pace and tire management, knowing the Barcelona circuit is notorious for tire-wear.  As the checkered flag waved, Clément’s quickest time was good for P15.

Qualifying got underway later Friday evening as the sun began to head towards the horizon, seeing track temperatures hit 40 degrees.  Clément wasted no time jumping the field, setting a time of 1:29.824 and slotting into P2 in the early parts of the session.  The Frenchman and his engineers decided it would be best to come back to the pits for a fresh set of soft tires, and wait for the track to cool before making his last attempt.  Gambling on time, Clément went out for his final lap just three minutes before the end of the session, hoping for ideal track conditions.  Crossing the line just before the checkered flag waved, Clément began his lap and was on pace for a top-5 finish, when he lost the rear before the chicane which disrupted the rest of his lap.  He was able to improve .5 seconds, with his new time of 1:29.367 good for 12th quickest.

Saturday afternoon’s sprint race saw the track temperature peak at 43 degrees, with Clément looking to be aggressive to try and reach the points.  The Barcelona-Catalunya circuit is notorious for being a difficult track to pass on, so a strong start could pay dividends.  As the lights went out, the Frenchman found himself unable to get around a slow-starter in front of him, dropping to P14 as others on the left side of the grid zoomed by.  The race stayed green for the first six laps, where Clément was able to stay on the wing of the driver in front, while keeping the driver behind out of DRS range.  The race’s only safety car came out on lap six as a driver in front spun into the gravel, seeing Clément regroup in P13 until the race went green again on lap nine.  For the next six laps Clément showed strong race pace, diving down into turn one to secure 12th position, and the fastest lap up to that point.  On lap twenty-four, the Frenchman was surging forward and made a brave pass into P11 in turn three, but was over zealous a few laps later and went wide, dropping to P14 where he would ultimately finish.

The sun returned for Sunday morning’s feature race, baking the circuit to a blistering 43 degrees.  Clément and his engineers elected to start on the alternate strategy, with five other drivers also choosing to start on the hard tires – hoping the gamble would pay off by the end of the race.  Even though Clément was on the hards, he had a lightning start as the lights went out, gaining a position immediately.  He settled into P11 while focusing on tire management for the next few laps, when an incident brought out the only safety car of the race.  The safety car went in on lap six, and drivers who started on soft tires began heading for the pits over the next several laps, seeing Clément surge to P2 by lap eighteen.  The Frenchman was able to stretch the gap to the drivers behind by over four seconds, and on lap twenty-one he took the lead of the race.  Feeling his tires finally give way on lap twenty-three, he dove into the pits for new soft tires.  Exiting the pits on lap twenty-four and in P14, Clément began a charge to the front of the field on his fresh set of softs.  Picking off the competition in short order, Clément put on a master class and was already in the points just two laps later in P10.  The next nine laps saw the young ace pass another five drivers, crossing the finish line in P5, just .3 seconds behind the driver in front.

With excellent tire management & clever race strategy, Clément came away with 10 points from the feature race.  Just one more lap could have meant a podium, but a nice haul of points is reason enough to be happy.  Clément still needs to nail his qualifying laps, which is a necessity next weekend as FIA Formula 2 heads to mystical Monaco for Round 5 of the 2022 Championship season.

“Thrilled to have another great feature race.  My car was really strong, and the race strategy worked out perfectly.  Tire management was key this weekend, which we were able to keep within the window.  Still looking to perfect my qualifying, which will be extremely important next weekend as we’ll be in Monaco.  I’m very much looking forward to tackling the streets of the Principality, and with how strong the car has been the last few races I’m feeling very confident it will be a great weekend.”