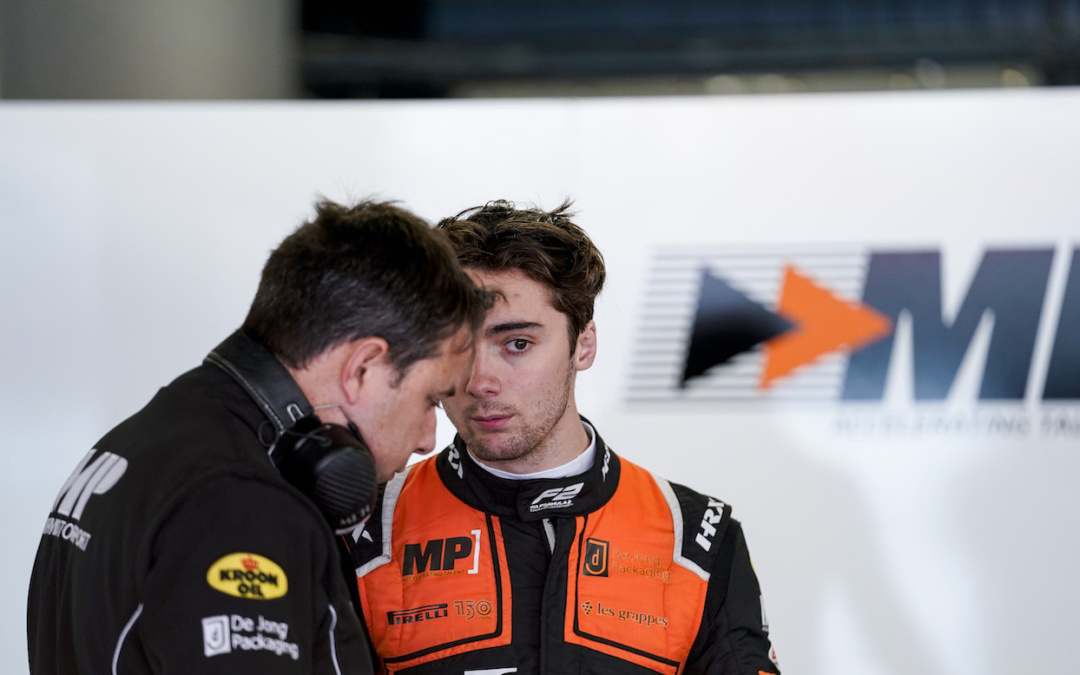 FIA Formula 2 was back in action this week for the one and only In-Season Test of 2022; marking its return to Europe after a Middle Eastern double-header to open the Championship season.  The Circuit de Barcelona-Catalunya played host to this week’s test in Barcelona, Spain, where damp track conditions & chilly weather were featured for the first two of the three day-test.  Having not scored points in the first four races of the season, Clément Novalak & his team arrived Monday eager to take advantage of this seasons’ final official test-days to fine tune his MP Motorsport car for the rest of the 2022 F2 campaign.

The test opened Tuesday morning to clear, cool temperatures, with Clément and his team deciding to use most of the day to focus on race simulations.  The session proved to be on the shorter side, as at the halfway mark it started to rain slightly, making the track damp and not ideal to gather important data.  Clément and his engineers decided to study the data from the first half of the session, and save their tires for the afternoon session a few hours later.  Tuesday’s final session featured clear skies and a dry track, giving Clément the opportunity to put his knowledge gained from the morning session to use.  While only using the hard tires for the entirety of the session, the young Frenchman was able to improve on his morning time by over a second, crossing the finish line with the 10th fastest lap of the day; impressive considering half of the drivers in front made their quick laps using the soft tires.

Windy, cold temperatures returned Wednesday, where Clément and his team continued working on their race simulations for all of the morning session.  After 40 tours around the circuit, Clément returned to the garage to debrief and go over the data with his engineers.  The rain returned during the afternoon session, so Clément and his team elected to stay in the garage until the track was fully dry.  After deciding to save his soft tires for the final day, Clément did a further 18 laps in the afternoon, clocking in the 7th fastest time of the session.

The final day of the in-season test began Thursday morning with the sun shining, seeing Clément pushing immediately as the session went green, setting a blistering lap time of 1:28.224, which would be the fastest lap of the Frenchman’s test.  After returning to the pits, Clément headed out again, but a technical fault caused his car to stop on track and ending his session, where he would ultimately finish with the 12th fastest lap in the morning after completing a total of 28 laps around the circuit.  The afternoon saw the final session of the week, where Clément focused on tire management in preparation for the next round in Imola next weekend.  Trying different strategies over a total of 36 laps proved beneficial, as Clément would finish the session in P8.

Clément made steady progress throughout the test, working with his engineers to dial-in his MP Motorsport car.  Ultimately finishing with the 14th fastest lap, and only .695 seconds behind the fastest lap of the test, the Frenchman feels confident in the steps made the last few days.  Round 3 of the 2022 FIA Formula 2 Championship heads to Imola, Italy next week, where Clément is poised to score the first points of his young F2 career.

“I am very pleased with the steps made during the last three days in Barcelona.  Working with my engineers on tire management has proved very beneficial, especially with the gains  I was able to make on the longer runs.  There are still a few areas which I need to put more focus in, especially qualifying, but overall I feel quite confident with my car.  I’m very much looking forward to Imola – fingers crossed we have a smooth weekend and I am able to secure my first F2 points.”