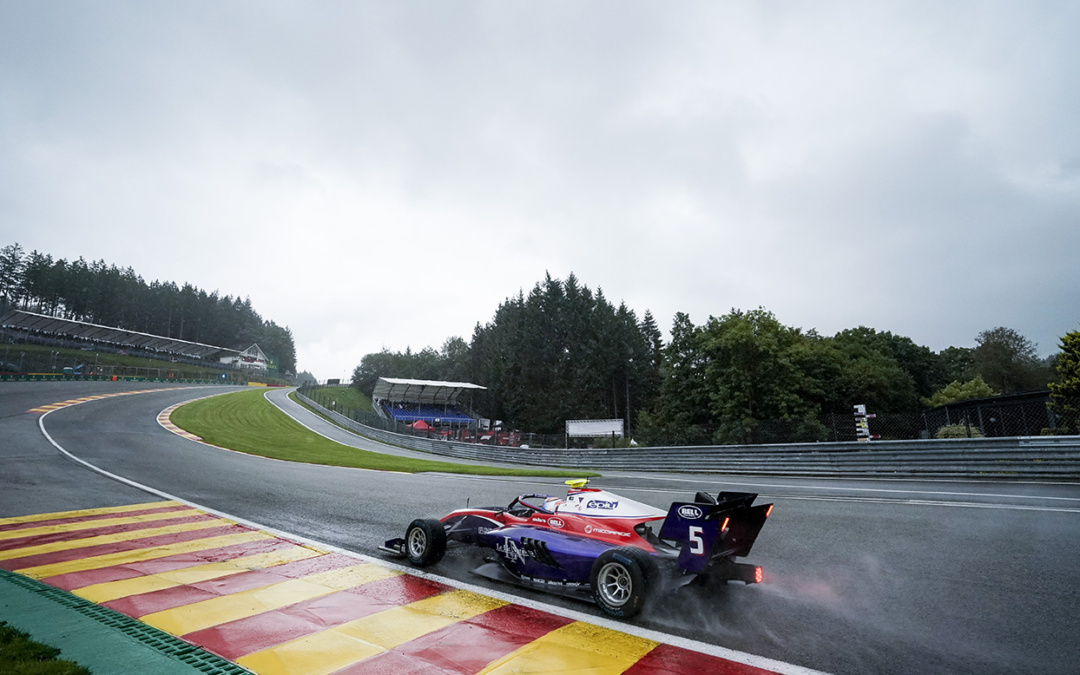 The FIA Formula 3 Championship headed to the foothills of the Ardennes in Belgium this weekend for the fifth round of the 2021 season, returning to the historic Circuit de Spa-Francorchamps.  Looking to build on the momentum of a strong triple-point scoring round in Hungary, Clément Novalak arrived facing the added challenge of ever-changing weather conditions.

Damp, foggy skies brought cool track temperatures to start the race weekend for Friday’s practice session, with Clément hoping to perfect the setup of his Trident Machine for qualifying later in the afternoon.  Halfway through the session while the damp track continued to improve, Clément was already second fastest.  As the chequered flag waived, Clément’s final flying lap of 2:05.330 put him at the top of the timing sheets (and a full half-second ahead of the nearest driver); proving not only to be the fastest of the session, but of the entire weekend.  Aware of incoming rain showers, Clément wasted no time at the beginning of qualifying to set the second fastest time on his first lap.  The rain came briefly, dampening the track, allowing no one to improve on their times until the end of the session as the pavement dried.  As the track evolved, Clément went for his final flying lap, however was impeded by a red flag in sector 3, nullifying any chance of a better time.  Ultimately qualifying P6 was a disappointment, but still a prime position for strong point-finishes over the weekend.

Rain returned overnight and into the morning, bringing in fog and a soaked track for Saturday’s first race.  After a delayed race start and two formation laps, it was deemed too dangerous and the race was briefly suspended.  After a thirty-minute delay, the reverse-grid race began behind the safety car, with Clément starting from P7.  Having to drive cautious in the wet conditions, Clément yielded to two other drivers to avoid contact, but made a stunning pass on his teammate on the outside of the famous Eau Rouge-Raidillon complex, picking up one of his lost positions during the penultimate lap.  Crossing the finish line, Clément picked up another position to secure P7 and 4 championship points, as a driver ahead of him was penalized for an earlier incident.

The start of Saturday’s late afternoon race saw clearer skies and Clément starting from 6th on the reverse-grid, but the track was still wet from rainfall throughout the day.  As the lights went out, Clément quickly made a pass to secure P5 in the first corner, while fending off another charging driver from behind through the challenging Eau Rouge.  Dealing with water spray from cars in front, Clément continued his cautious drive from earlier in the day to maximize his results.  On lap 8, he took advantage of the improving track conditions to set the fastest lap of the race.  The rain came again, sending a few cars off track and bringing out the safety car, which is how the race would finish.  6 more championship points for finishing P5, and the additional 2 championship points for setting the fastest lap netted Clément a total of 12 championship points for both races on Saturday.

Staying true to the weekend’s weather, rain and fog greeted the start of Sunday’s feature race, which started behind the safety car after two formation laps.  Clément would remain in his qualifying position of P6 for the first six laps, until he bravely dove down the inside of turn 5 after late braking to secure P5.  By lap 11, Clément was on the rear-end of the driver in front, which turned into a great battle lasting until the end of the race.  As he crossed the finish line on the final lap, Clément settled for P5, securing another 10 championship points.

Driving smart while choosing his moments through the treacherous weekend conditions, Clément achieved another triple-point scoring finish, showcasing his consistency in the last two rounds.  P6 in the driver’s standings with 2 rounds & 6 races remaining, Clément feels confident he can continue to make ground in the Championship.  There is no time to rest, as FIA F3 heads to the Netherlands this weekend for round 6 at Zandvoort, from 03-05 September.

“All-in-all, my pace this weekend was very rapid.  After being fastest in practice, I was on pace to qualify on the front row, but unfortunately wasn’t able to finish my lap.  I am thrilled that my teammates and I finished so strong this weekend to narrow the gap in the Team’s Championship.  Qualifying in Zandvoort is key, as it is one of the hardest tracks on the calendar to overtake on, so I am looking forward to the challenge this coming weekend.”