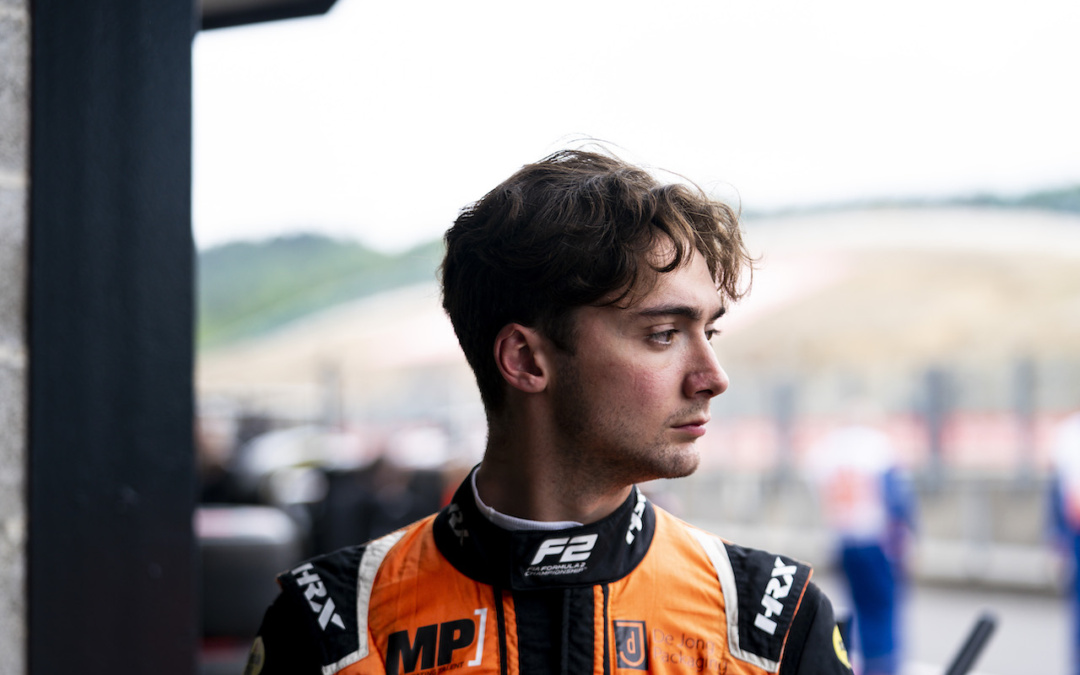 After a months-long break, FIA Formula 2 returned to action this weekend, seeing historic Spa-Francorchamps host the eleventh round of the 2022 campaign.  Clément Novalak arrived to the rolling hills of the Ardennes feeling fresh & recharged from his August break away from the racetrack, eager to go into the next 3 weeks of back-to-back racing on from.  Tricky weather conditions on Friday proved to factor highly for both practice & qualifying, setting the stage for a tale of two halves for the Frenchman in Belgium.

A chilly and damp Friday morning opened up Clément’s race weekend, with slight drizzle providing poor track conditions for free practice.  Clément would head out of the pits 10 minutes into the session, but would return along with most of the other drivers after a few reconnaissance laps.  After a further 15 minutes in the pits, the Frenchman would return to the track to search for the right balance of his MP Motorsport car.  An immediate push lap would see the Rookie set a blistering first sector, and was on pace for a spectacular lap, but a stopped car would bring out a red flag.  Once the track was cleared, an eager Clément set out on his out lap, but two cars in front would slide off the track in the tricky conditions, bringing out the second red flag, seeing race control deciding to end the session early.  After only 7 laps around the 7 KM circuit, Clément was unable to set a proper push lap, and would finish in 20th position.

Later Friday evening qualifying got underway in identical weather conditions to free practice.  As Clément was midway through his first push lap, a stopped car on track brought out a red flag, sending the Frenchman back to the pits for 10 minutes.  Once the track was cleared, Clément would jump out of the gates, setting the fastest first sector and jumping to P3 on the timing sheets with a time of 2:01.106.  After another lap where he didn’t improve his time, the Frenchman returned to the pits for a fresh set of Pirelli soft compound tires and minor adjustments to his car.  Light drizzle would continue for the remainder of the session, seeing Clément have time for two final push laps.  On his first attempt out of the pits, he would match his blistering first sector, but traffic would hold him up.  His final lap of qualifying would see three-green sectors for the Frenchman, improving his time to 1:59.380.  Although he was one of the few to improve in the second half of the session, Clément’s best lap was only good for 16th fastest, setting up difficult sprint & feature races.

Saturday evening’s sprint race brought cloudy skies and dry conditions.  The lack of dry laps on Friday proved to set up a challenging race for the Frenchman on Saturday, seeing him start from sixteenth on the grid, where tire management would play a key factor in the sprint race.  As the lights went out, Clément held his position through a jam-packed turn one.  Fending off challenges from behind for the following seven laps, Clément would fall into the clutches of DRS and would drop to P17.  Continuing his defense for the next four laps, a safety car was deployed when a car hit the wall.  With only seven laps remaining in the race, Clément and his team would elect to stay on his deteriorating tires.  Sitting in P11 when the safety car returned to the pits, Clément would have six drivers behind him on fresh Pirelli soft compound tires.  Once racing went green again, Clément would be swallowed-up immediately – dropping to P15 by the end of the lap, and ultimately P17 as the chequered flag waved.

Sunday morning’s feature race would see partly cloudy skies and Clément starting on the alternate strategy on Pirelli medium compound tires.  Lining up in sixteenth on the grid, the Frenchman would have his usual lightning-fast reaction as the lights went out, rocketing to P15 through the exit of turn one.  Seemingly feeling at one with the car, Clément continued his charge through the field and would already make multiple overtakes to settle into P10 by lap five.  Knowing he would have to manage his tires for a long opening stint, the Rookie would have to drive an error-free race.  The soft-tire runners would begin pitting on lap eight, and Clément would find himself in P3 by lap eleven after everyone in front would make their mandatory stops.  Having expertly managed his tires, he would dive to the pits on lap seventeen for the softer compound tires.  Rejoining the race in P14, Clément would have just eight laps to regain position to finish in the points.  After priming his tires for two laps, the Frenchman began his impressive charge through the field.  Lap twenty saw him take P13, and lap twenty-two he made the overtake for P12.  The next lap would see him claim P11, and he would push forward hunting for a point.  On the final lap, he would make the overtake to get into the points, crossing the line in P10 as the chequered flag waved.  Due to a driver receiving a post-race penalty, Clément would inherit ninth position, and a well-deserved two Championship points.

Clément Novalak continues to impress during the feature race, showcasing multiple overtakes and excellent tire management.  Another weekend telling a tale of two halves, but Clément was able to make the most after a difficult start to the race weekend, rewarding himself with two Championship points for his effort.  FIA Formula 2 heads immediately to the Netherlands this week for round 12 of the 2022 campaign.  Zandvoort proves to be a difficult circuit for overtaking, so Clément will need to put in a great qualifying session to ensure he sets himself up for success this weekend 02-04 September.

“After a frustrating Friday & Saturday, I was able to put everything together for the feature race.  My car felt like it was on rails the entire race, and I really enjoyed charging through the field.  It feels great to be rewarded with points after that drive.  I’m very much looking forward to Zandvoort next weekend – it’s amazingly fun to drive, but it’s a difficult circuit for overtaking, so I need to qualify well.”