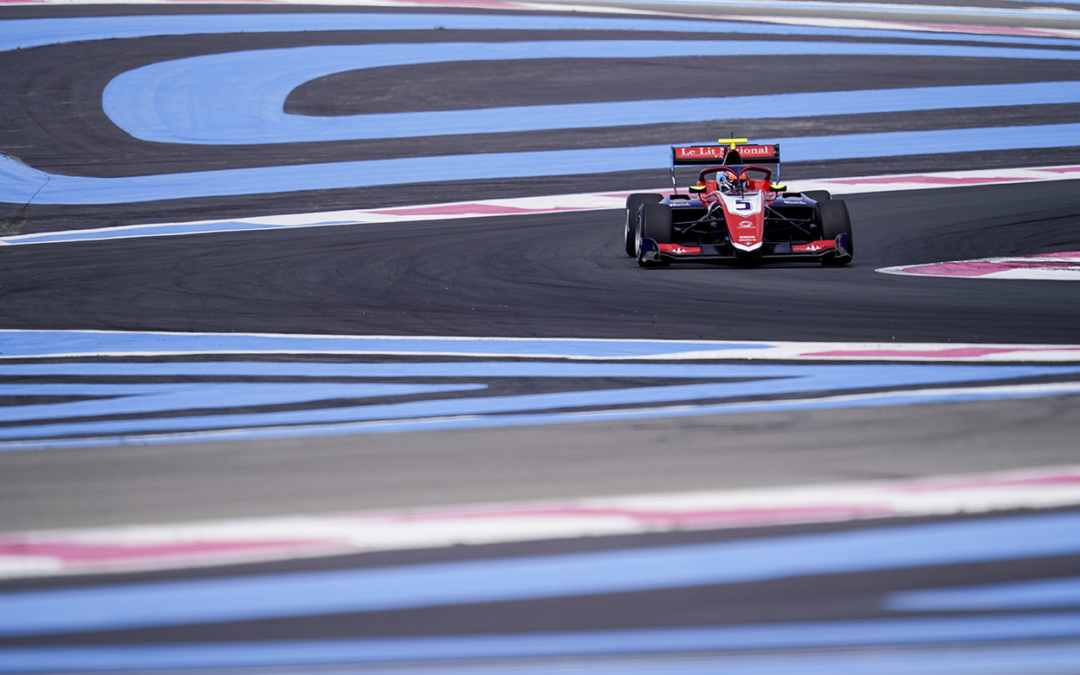 The FIA F3 Championship headed to the south of France this weekend for the second round of the 2021 season, seeing the return of racing at the Circuit Paul Ricard in the medieval village of Le Castellet, France.  At this season’s opening round in Barcelona last month, a calm & collected drive netted a fantastic points-haul for Clément Novalak, who entered this weekend 3rd in the Driver’s Championship standings.  After finishing at the top of the timing sheets at the final in-season test in Jerez, Clément headed into his home race weekend in France eager to put his Trident Motorsport machine towards the front of the grid.

Free practice and qualifying kicked off the race weekend on Friday, bringing clear and sunny skies.  Utilizing the morning’s practice session, Clément looked to build on the knowledge gained from his last outing in Jerez to find the right set-up.  With all 30 cars on track for qualifying, Clément had to bide his time to maximize opportunity for a top time.  After his first flying lap, Clément found himself 9th fastest, .722 seconds behind the quickest time.  Changing to new tires before the end of the session, Clément managed to slash the gap to pole position down to just .321 seconds, qualifying in 6th position for Sunday’s feature race.

Sunny skies returned for race 1 on Saturday, seeing Clément start from 7th in the morning’s reverse-grid, where he remained for most of the race thanks to a precise & consistent drive.  Clément had a great battle with the drivers in front for most of the race, and was able to gain a position into P6 just after the half-way mark of the 20-lap race, where he would ultimately finish.  A time penalty from a driver in-front promoted Clément to P5 at the conclusion of race 1, netting the Frenchman an important 6 Championship points in the first of three-home grand prix for the weekend.

A P5 finish in the morning race meant a reverse-grid starting position of P8 for Clément on Saturday afternoon.  As the lights went out for the start of race 2, Clément immediately picked up a position as a car in-front stalled on the grid.  For the first five laps, Clément had to fend off competition from behind, while at the same time try to pass the driver in front.  Clément was finally able to make the pass into P6 with a fantastic overtake on the inside, however by the time the pass was made, the leading pack of cars was over 5 seconds ahead. Stuck in the clutches of DRS, Clément put up an admirable defense from multiple attacks behind for the remainder of the race.  Finally, with only a couple laps to go, Clément broke away from the charge behind, and closed the gap with the cars in front to just 2 seconds as the chequered flag was waived, where he would collect 5 Championship points in P6.

The skies opened up on Sunday as Clément lined up in his qualifying position of 6th, drenching the tarmac before the final race of the weekend.  By the end of turn 2 on the opening lap, Clément had already claimed 3 positions and was comfortably in P3, but struggling to find grip in the wet conditions.  On lap 6, Clément made some aggressive moves to try and claim P2, but the wet track sent him wide, and he dropped two positions to P5.  The clouds began to break, rendering the rain tires unsuitable for overtaking, and Clément would have to settle for a 5th place finish.  This result also marks a 6th consecutive points finish, where Clément is one of only two drivers out of the 30-driver field to have scored points in every race this season.

The lack of a home-race podium finish is disappointing for Clément, however 21 Championship points during round 2 keeps him in the title hunt, where he currently sits 4th overall.  Clément plans to use his missed opportunities as motivation, and will continue to work with his team to fine-tune the qualifying setup of his Trident machine, pushing for maximum points during the rest of the season.  FIA F3 will be back on track next month for round 3 of the 2021 season from 01-03 July at the Red Bull Ring in Spielberg, Austria.

“This weekend didn’t go as I had hoped.  It is nice to come away with decent points from all three races, but I didn’t deliver on Sunday.  Wanting more during the feature race, I made too many mistakes and had to settle for 5th place.  We’ll regroup now in preparation for Red Bull Ring in two weeks, where I’ll use this sour taste from Sunday’s race as extra motivation to push even harder.”