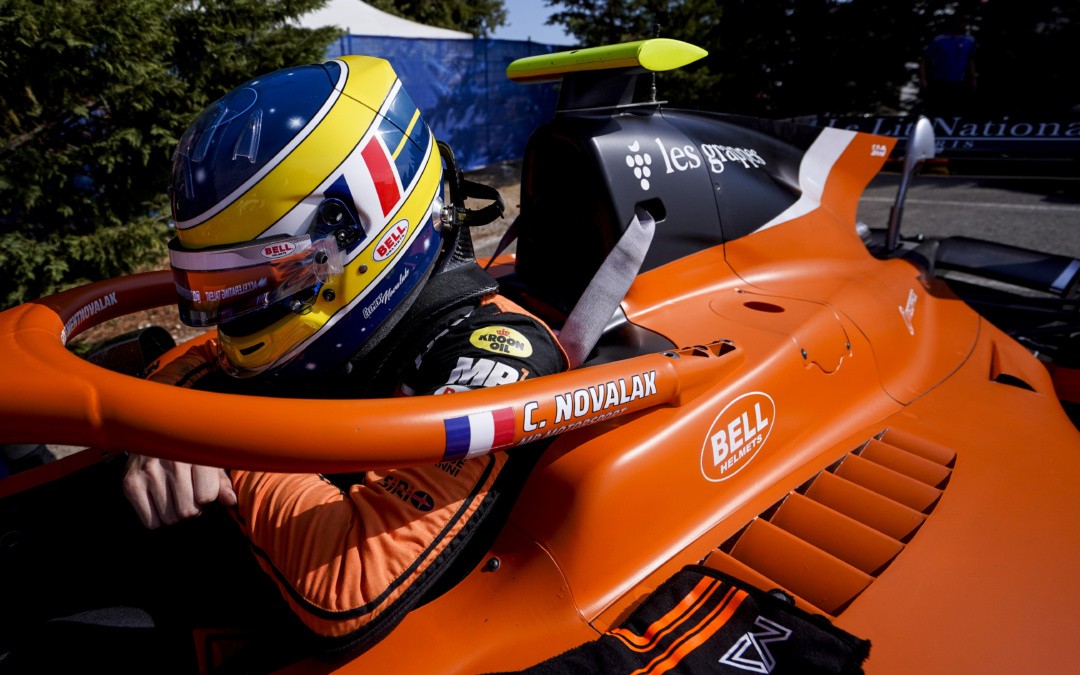 FIA Formula 2 headed to the south of France this weekend for the 9th round of the 2022 Championship season, meeting a heat wave in Le Castellet – which brought an intense sun and scorching track temperatures.  After a run of scoreless races and difficult qualifying sessions, Clément Novalak was keen to climb back up the Drivers’ Standings.  In celebration of his first home-race in FIA F2, the Frenchman unveiled a stunning tribute helmet paying hommage to his father who used to bring him to Circuit Paul Ricard as a child.

Friday morning opened up Clément’s race weekend, with sunny skies and 32-degree temperatures.  The bright sun baked the circuit to an incredible 47 degrees, setting up a practice session which would be difficult for the Frenchman to find the right balance to his MP Motorsport car.  On his second push lap, Clément would find himself in P10 after a lap-time of 1:48.894.  Improving his time on his third push lap by over seven hundredths of a second, the Rookie was 14th fastest before heading to the pits for fresh Pirelli hard tires and adjustments to his car.  With twelve minutes remaining in the session, Clément would head out on track to find the pace for qualifying, but traffic would hinder his first push lap out of the pits.  A virtual safety car slowed the field during his second push lap when a car stopped on track.  When the track went green, there was time for one more push lap, where Clément would set personal-best first and second sectors, but a mistake in the third sector would mean that his best lap from the first half of the session would be his quickest, seeing him finish in P19 for free practice.

Later Friday evening qualifying got underway as the sun began to set.  With an air temperature of 33 degrees, the circuit had risen to almost 50 degrees, proving a difficult challenge to manage the temperature of the Pirelli Soft tires for the duration of the session.  The extreme heat would affect the tires so profoundly, allowing only a maximum of two push laps until the tires would fade away.  On his first push lap, Clément would set the 21st quickest time, needing to find more time in every sector.  After his second push lap, the Frenchman would find himself in P17 after setting a time of 1:45.976, sending him to the pits for a fresh set of tires and minor adjustments to his car.  With ten minutes left in the session, an eager Clément headed out to set a strong time, but a car stopped on track bringing out a red flag.  After the car was removed, the Frenchman burst out of the gates to jump to P11, and would best that time on his final push-lap to 1:45.117, however it would only be good for a qualifying position of P16 as the chequered flag waved.

Saturday evening’s sprint race brought more sun and blistering track temperatures of 50 degrees.  Starting from the pitlane after stalling on the grid before the formation lap, Clément would put on soft tires to try and gain an advantage.  After a great first three laps, the Frenchman was in P19, and would stick to the drivers in front for the next several laps.  On lap ten, Clément would narrowly avoid a spinning car in front, moving into P17 as the safety car was deployed.  The Frenchman welcomed the next couple of laps under caution to let his tires rest before racing went green again on lap thirteen.  Clément jumped to P16 on the following lap, seeing him then make a diving pass to snatch P15 on lap fifteen.  With his tires fading fast, he loses a position on the next lap, and would battle furiously with another car for the remaining four laps.  As he crossed the line on the final lap, he would finish P17, but gained a lot of knowledge on the soft tires for Sunday’s feature race.

Sunday morning brought slightly cooler track temperatures for the feature race, with Clément starting from P15 after a driver was penalized in the sprint race.  Electing to run with the hard tires on the alternate strategy, the Frenchman would have a solid opening lap to hold his position, while picking up two positions after narrowly avoiding two spinning cars as the safety car was deployed.  With the safety car ending after a few laps, Clément would be the first driver to pit on lap 8, switching to Pirelli’s soft tires – a bold strategy which could pay dividends by the end of the race if the Frenchman was able to manage the softer compound for twenty-two laps.  Exiting the pits in last place, Clément would make his way back up the order with lightning speed.  In just five laps, he was already back in P12, with the majority of the drivers in front needing to make their mandatory pit-stops.  Clément would drive an error-free race, expertly managing his tires, and was in P10 with just ten laps to go.  Extending his lead to the driver behind by over five seconds, the penultimate lap saw a driver in front stop on track, seeing Clément move to P9.  As the chequred flag waved on lap thirty, Clément would move to P8 as a five-second penalty was given to his nearest competitor – a fantastic result after a mature drive and bold strategy by the Frenchman & his team MP Motorsport.

Clément’s weekend was a tale of two stories – a fantastic feature race with points for his home grand prix, but also continuing struggles in qualifying.  The Frenchman shined with his racecraft and tire management, seeing a bold tire strategy pay dividends.  Clément will be back on track next weekend at Hungaroring for Round 10 of the 2022 FIA Formula 2 season, in Budapest, Hungary from 29-31 July.

“A sweet ending to a tough weekend.  It was an absolute pleasure driving in front of French fans on my home circuit, while seeing thousands of French flags is an experience I’ll never forget.  I am happy we were able to make progress throughout the weekend after a difficult qualifying, and I’m confident we are on the correct trajectory to finish the season strong.  Looking forward to Hungaroring next weekend – a track where I’ve had great success.”