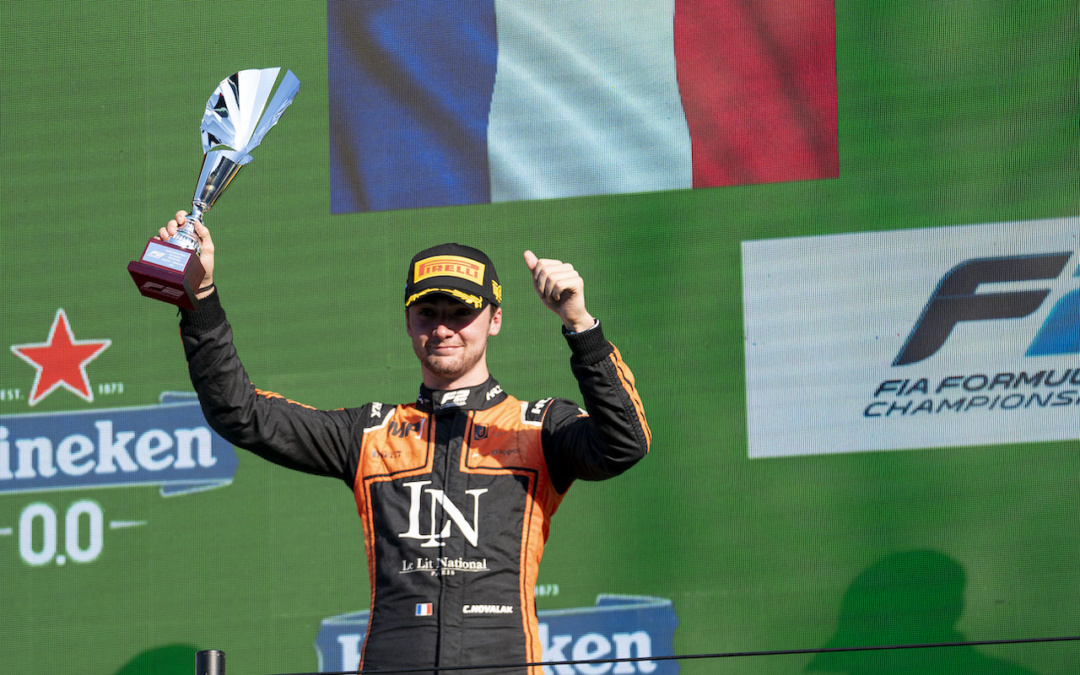 FIA Formula 2 headed to the northern Dutch seaside town of Zandvoort this weekend for the twelfth round of the 2022 Championship.  Hosting the Championship for the first time, Circuit Zandvoort would provide a difficult challenge for Clément Novalak, fresh off a top-10 finish during his outing in Spa last week.  Novalak enjoyed two second-place finishes at Zandvoort last year while driving in FIA Formula 3, so he arrived to the Netherlands poised to attack the tricky circuit, knowing qualifying would be key to ensuring a successful weekend.

A chilly, partly cloudy Friday morning opened up the race weekend, seeing Clément waste no time attacking the circuit and setting the 4th quickest time on his first push lap.  A ten-minute red flag immediately followed, sending the Frenchman back to the pits.  On his next few laps out once the circuit was clear, he would continue to improve on his lap times before another red flag would suspend the session.  Using his time in the pits for minor adjustments, Clément and his engineers looked to fine tune his MP Motorsport car.  With only ten minutes remaining when the track went green again, he had time for just two more push laps.  Setting his session best time of 1:24.077 on his first lap out, the Rookie would finish the session in P17.

The sun would continue to shine for the rest of Friday, heating the circuit to thirty-seven degrees before the late-afternoon qualifying session would begin.  A twenty-five KPH tailwind going into turn one would add a challenging element to the session, seeing Clément on Pirelli soft compound tires for the first time of the weekend.  His first push lap of 1:22.656 would be good for P14, with the Frenchman improving during his second push, but a red flag would send him back to the pits before he would be able to finish his lap.  With great first and second sectors, Clément would need to find time in the final sector to have any chance at a competitive lap.  He would improve his time on his first lap out of the pits, but during his final lap of qualifying is where the Frenchman would shine – setting a blistering first and second sector, with a personal-best third sector.  His time of 1:21.559 would be good for 10th fastest of the session, the Rookie’s best qualifying result of the season, and would have him line up on reverse-grid pole for Saturday evening’s race.

Saturday evening’s sprint race brought more sun & hot track temperatures, seeing Clément on reverse-grid pole sitting on hard compound Pirelli tires.  As the lights went out, the Frenchman had slight wheel spin, but enough to allow his nearest competitor get alongside him going into turn one.  Clément was on the outside, and battled through the first two corners, however made the mature decision to slide in behind the challenger to ensure he wouldn’t lose any more positions.  Settling into P2, Clément would have an error-free drive while managing his tires & picking his battles.  DRS was enabled on lap four, with the Rookie within the grasps of the driver behind, but Clément would stretch his gap to over 1.2 seconds through lap six.  By lap sixteen, Clément was driving a consistent race, and for the next ten laps would keep identical pace to the race leader while being able to stay out of DRS range to the drivers behind.  The safety car would slow the field on lap twenty-five when a driver went off track and became beached in the notorious Dutch gravel.  After a few laps under caution, racing would resume for an exciting final lap shootout.  Clément would apply the pressure to the leader, but would not be able to get close enough to make a move.  The Frenchman would cross the finish line in 2nd place, earning eight Championship points & his first podium in FIA Formula 2.

Sunday morning’s feature race would see partly cloudy skies and mild twenty-two degrees air temperature.  Clément would start on Pirelli soft compound tires, having a brilliant start as the lights went out.  By turn three, the Rookie was comfortably in P7 and pressuring the driver in front, when the safety car was deployed before the end of a hectic first lap.  The accident caused damage to the TecPro safety barrier, bringing a red flag and a lengthy delay to the restart of the race while repairs were made.  The race would finally resume on lap six, seeing Clément holding position through turn one and through to lap ten, when the Frenchman would be the first of the front runners to dive to the pits for a set of new Pirelli hard compound tires.  Rejoining the field in P19, his decision to pit would cause other drivers to begin their tire changes under green flag conditions the following seven laps, when another safety car was deployed on lap seventeen.  Clément’s race strategy was working perfect, as he was a net P5 and on course to collect a big haul of points.  On the restart of the race, the leading driver chose to leave it as late as possible to make his getaway, setting off a chain-reaction of drivers behind crashing into each other.  Clément was caught up in the carnage, hitting the driver in front after a sudden brake, which snapped the Frenchman’s front suspension – ultimately ending his feature race.  The was nothing Clément could have done to avoid the carnage, bringing an end to what would have been the Rookie’s best Formula 2 weekend to date.

Clément Novalak continues to make positive strides, seeing a top-10 qualifying result & the first podium of his debut FIA Formula 2 campaign.  On pace to collect another top-5 finish in the feature race, Zandvoort would have been his most successful weekend this season.  FIA Formula 2 now heads back to Italy this week for the penultimate round of the 2022 Championship season.  Clément is feeling very confident after an overall solid weekend, and is looking forward to attacking Monza, “The Temple of Speed”, this weekend from 09-11 September.

“Overall I’m satisfied with my weekend in Holland.  I finally put in a decent quali lap to put myself in position for good results.  I’m thrilled to have stood on the podium for the first time in F2, and I was on pace for a top-5 finish on Sunday but had no chance to avoid the carnage on the restart which ended my weekend prematurely.  My confidence is at an all-time high going into Monza this weekend.”