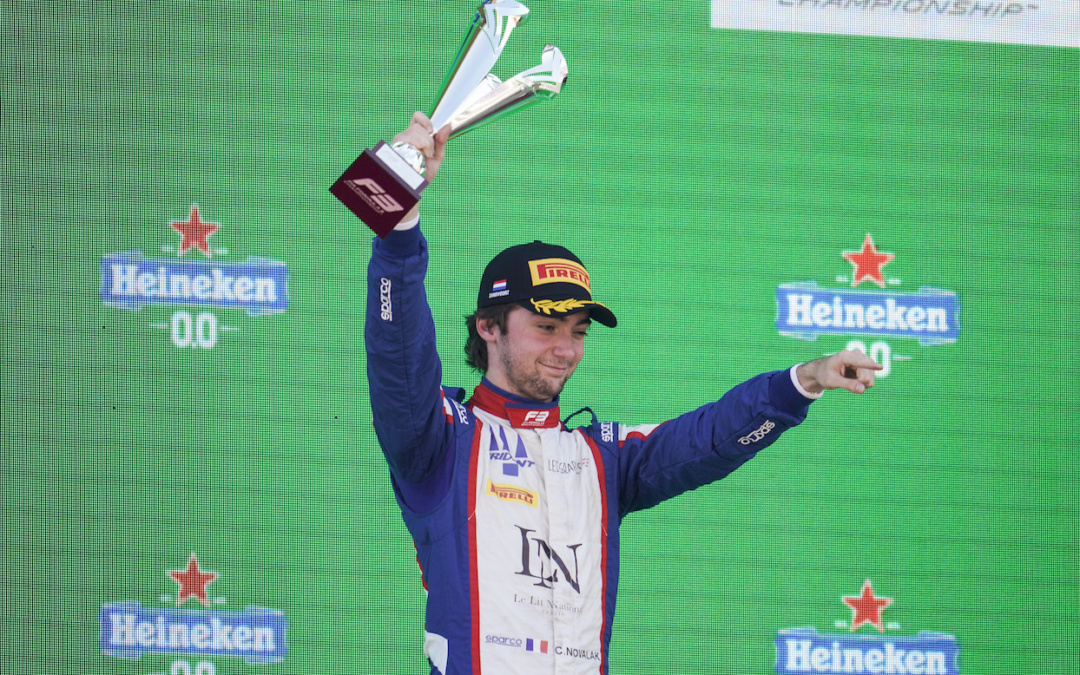 FIA Formula 3 was back in action this weekend at the seaside town of Zandvoort in the Netherlands, for the penultimate round of the 2021 season.  With the addition of steep banking to the historic Circuit Zandvoort, a new challenge awaited the shortest track on the FIA F3 calendar, which is notorious for being difficult to make overtakes.  Arriving into Holland with only six races of the 2021 season remaining, Clément Novalak was eager to solidify his position near the top of the closely contested driver’s standings.

Bright, sunny skies graced the circuit to open up the race weekend on Friday, where Clément wasted no time to find the right balance of his Trident Machine, jumping to the top of the timing sheets only 10 minutes into the session, with a time of 126.419.  After a red flag brought out a lengthy delay to clear gravel off the tarmac, Clément head back out trying to perfect his setup.  The short track made it difficult to move around traffic, and after another lengthy red flag, only enough time for one flying lap was left.  Clément made the most of the situation, improving on his lap time, and finished in P5.  Traffic continued to be an issue in the afternoon qualifying session, as Clément wasn’t able to get a solid lap in until 10 minutes was left in the session, where he found himself in P3.  After the session was restarted due to another red flag, Clément went out with only enough time to make one more pass to improve.  As the chequered flag waived, his new time of 1:24.961 was good for P5.

Saturday’s morning race saw Clément starting from P8 in the reverse grid, where he immediately dropped back to P10 after turn 1 when he was passed outside after being caught behind a slower driver.  Just past the midway point, Clément was in P8 when an incident brought out the safety car.  On lap 20, the safety car finally returned to the paddock, and Clément wasn’t able to keep his position.  At the end of the race, Clément crossed the line in P11, however that meant he would start the reverse-grid afternoon race on the front row in P2.

The weather continued to be pleasant for the beginning of race 2 which started late in the afternoon on Saturday.  This was Clément’s first front-row start this season starting from P2, and he took full advantage.  His lightning quick reaction off the line saw him alongside the leader going into turn 1, emerging P1 at the exit of the corner.  Clément would build a sizable gap for the next few laps, but a safety car bunched up the pack again.  When the safety car entered the pits on lap 7, Clément had to push to stay out front and try to stave off the DRS train behind him.  He did so valiantly for the next 9 laps, but the inevitable happened and he dropped down to P2 on lap 16.  Clément  stayed close to the leader through the remainder of the race, finishing just 3 tenths of a second behind as they crossed the line, claiming 12 points and his second podium of the season in P2.

The sun was shining for Sunday’s feature race, where Clément started from his qualifying position of P5.  As the lights went out, Clément bravely braked late into turn 1, overtaking his teammate to claim P4.  Clément would go on to drive a splendid, mistake-free race, while sticking to the driver in front, biding his time for an opportunity of an overtake.  Finally, on lap 22 the chance arrived on the banked corner of turn 3, when contact between both drivers ahead left a space for Clément to make his move, claiming two positions to move into P2.  After a brief virtual safety car, the race finished with Clément taking his second podium of the weekend, and an impressive 30 total points, catapulting himself into P3 of the driver’s championship.

Clément continues to showcase his consistency, being rewarded with 2 podiums this weekend and his biggest point haul of the season, jumping into P3 of the driver’s standings.  From 24-26 September, the final round of the 2021 FIA F3 championship season will be held in Sochi, Russia – the only time this year where F1/F2/F3 will race alongside each other in the same Grand Prix Weekend.

“I really enjoyed this weekend, and feel like it was the best my car has felt all season.  The pace was strong, and the results show how we have progressed this season.  To come away with 30 points, 2 podiums, and now 3rd in the championship, Zandvoort couldn’t have been better.  I’ll take this momentum into Sochi, although I’m a bit disappointed we aren’t going to Texas as I was really looking forward to COTA.  Sochi is a great track, and I can’t wait to finish off my season there – hopefully on a high note.”