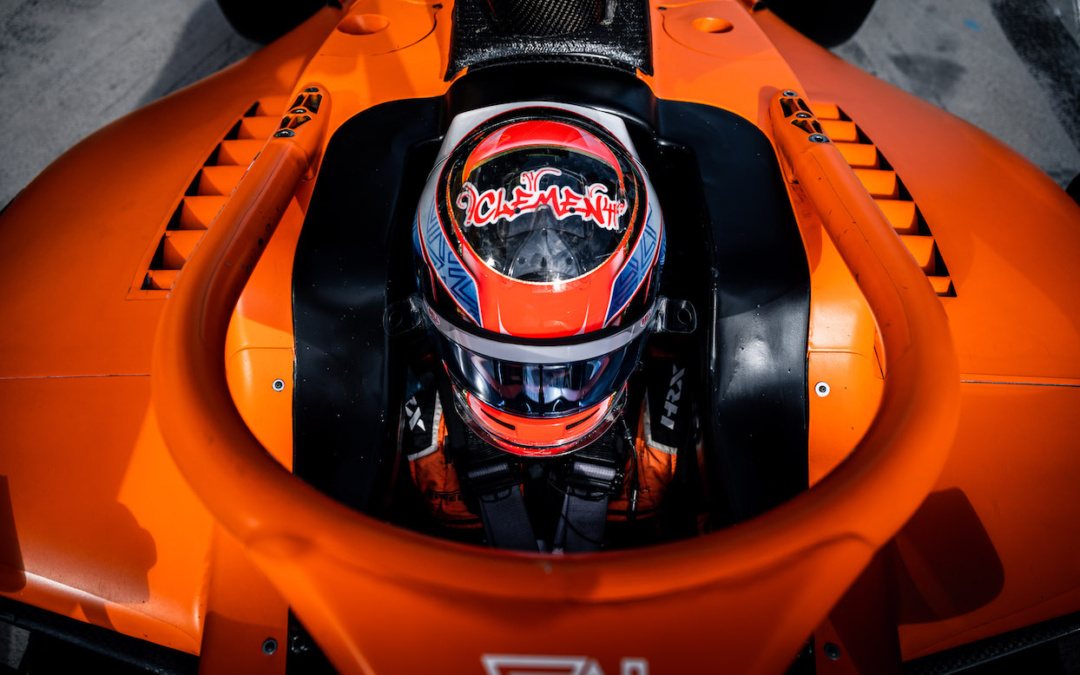 FIA Formula 2 traveled east to Budapest over the weekend, seeing Hungaroring play host to the 10th round of the 2022 Championship season.  A mixture of Hungarian summer weather was featured throughout the weekend, bringing blistering 50-degree track temperatures on Friday, and threats of rain on Sunday.  Fresh off the heels of an impressive drive at Le Castellet just one week ago, an eager Clément Novalak looked to have a solid weekend before the Series would have their traditional summer break.

Friday morning opened up Clément’s race weekend, with sunny skies and 28-degree temperatures gracing the Hungaroring for free practice.  Clement jumped out of the gate immediately on his first flying lap, setting the ninth fastest time.  On his second, he improved his time by over a second to find himself in P11 on the timing screen.  He would then head to the pits for a fresh set of medium compound tires and minor setup adjustments.  The Frenchman would do just one push lap before returning to the pits again for further adjustments to his MP Motorsport car.  Hitting the circuit with ten minutes remaining, Clement would have time for one more push lap.  He would improve his time to 1:30.660, however was not completely happy with the balance, and would finish the session in P16.

Later Friday evening qualifying got underway as the sun began to set.  With sunny skies and an air temperature of 33 degrees, the track had risen to 50 degrees, proving a difficult challenge to manage the Pirelli soft compound tires for the entirety of the session.  With the high track temperature, the tires would only be useful for two push laps before they would fade away.  Clément would set the 4th fastest time on his first push lap, before it was deleted for exceeding track limits.  His second lap time of 1:29.585 was good for 13th quickest, seeing the Frenchman head to the pits for a fresh set of tires.  With eleven minutes remaining, Clément went back out on track and would not improve his time on his first push lap.  With most of the field failing to improve during the second half of the session due to the extreme track temperature, Clément would have to find the most out of his car.  On his final push lap, the Rookie set a personal best second sector, and had a very rapid final sector, being one of the few in the field to improve on his time during the difficult half of the session.  His improved lap time of 1:29.481 would ultimately be good for P19, a disappointing finish to a demanding qualifying session.

Saturday evening’s sprint race brought cloudy skies and cool track temperatures after a day of rain.  With the track being freshly rubbered-in by the Formula 1 qualifying session held just before, conditions were perfect for a motor race.  Clément would start the race on medium compound tires, where the drivers behind him would go with the alternate strategy on soft tires.  As the lights went out, the drivers behind naturally got off the line quicker than the Frenchman, seeing him drop two positions going into turn one.  After a frantic first lap saw an accident in front, the safety car would be deployed and Clément would settle into P20.  After a few laps under yellow, the race would return to green on lap 4, seeing Clément have a speedy restart to the race.  The fast-charging Rookie would dive to the inside of turn 2 for an overtake, but his tires locked up and sent his car into the driver he was trying to pass.  The contact broke Clément’s front wing and gave him a flat tire, seeing him limp back to the pits for a new wing and a fresh set of soft compound tires.  Shortly after exiting the pits to rejoin the race, the stewards handed the Frenchman a 10-second time penalty for causing the collision.  Clément and his team elected to serve the penalty in the pits, hoping for a safety car to see him back in the hunt for points.  After his second pit stop, the Rookie would rejoin the field a lap down, but would drive a rapid race until the chequered flag waved – holding the fastest lap of the race for over 20 laps in the process.  The safety car never came back out on track, seeing Clément ultimately finish in P20.

Sunday morning brought cloudy skies and chilly temperatures, with the threat of rain throughout the race.  Clément would start on medium tires from nineteenth, enjoying a lightning reaction as the lights went out.  After picking up 4 positions through turn four of the opening lap, the Frenchman continued to show strong racecraft through lap seven, stretching his gap by over two seconds, and making an expert pass to claim P14.  Drivers who started on soft tires began to make their mandatory pit stops the following few laps, and on lap nine the Rookie made another spectacular overtake for P9.  By the time everyone in front would make their pit stops, Clément would be comfortably in P7 while trying to extend the life of his tires as the threat of rain was still present.  Hopes for rain and a strategic pit stop would fade away, seeing Clément dive to the pits on lap 24 to change to soft tires.  He would rejoin the field down in P21, but wasted no time climbing back up the order.  The Frenchman would put on a stellar masterclass for the following ten laps, seeing him make pass after pass and holding the fastest lap for over ten laps.  His charge up the field could only be stopped by the chequered flag, with Clément crossing the line in P12 after driving a fantastic race and picking up seven positions – finishing just outside the points.

Clément continues to impress while on track, displaying superb racecraft & fantastic overtakes.  Lack of pace in practice & qualifying are still hampering the Frenchman’s quest for big points, however Clément will spend the next few weeks resting & recharging his batteries so he is able to attack the final rounds of the season with full force.  FIA F2 racing will resume at the end of August after a much-needed summer break.  Round 11 of the 2022 Championship season will be held at one of Clément’s favorite circuits, Spa-Francorchamps in Belgium, from 26-28 AUG.

“All things considered I really enjoyed the feature race.  I had solid pace, picking up 7 positions along the way.  Although I didn’t score any points, our race pace is quite strong. I’m looking forward to summer break, where I plan to rest & recharge my batteries so I can go into the final rounds of the season on the right foot.  Spa is one of my favorite circuits where I’ll be fighting for big points next month.”