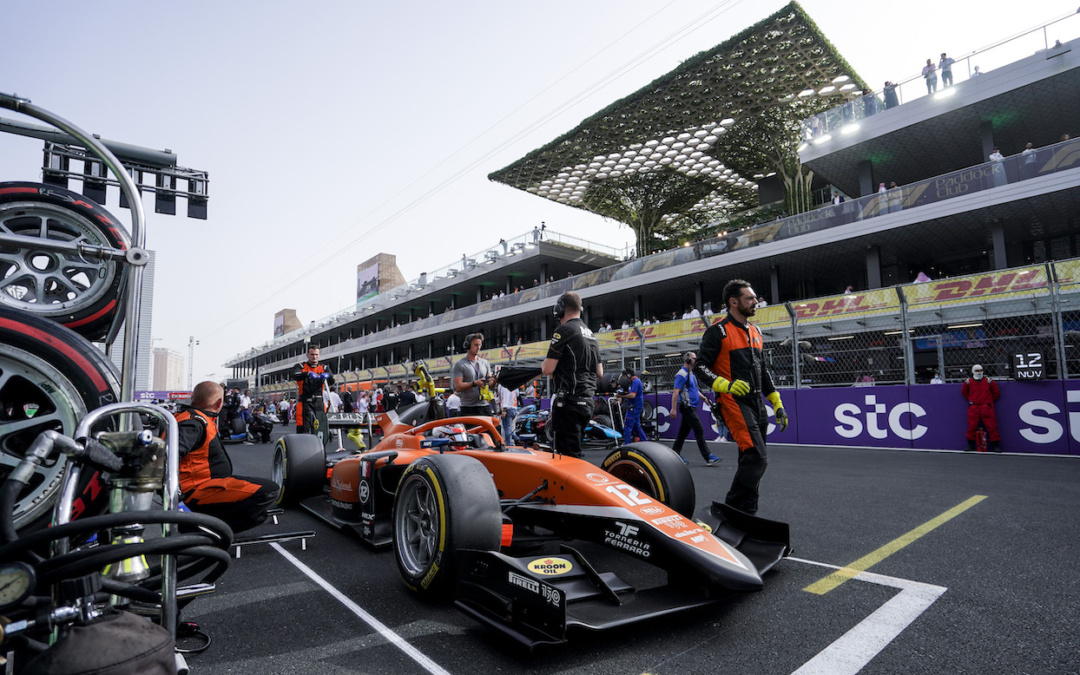 The Kingdom of Saudi Arabia welcomed the FIA Formula 2 championship this weekend for round two of the 2022 championship, wrapping up the Middle Eastern doubleheader to start the season after an action-packed Bahrain GP a week ago.  Returning to the Red Seas port city of Jeddah, where Clément Novalak made his F2 debut at the end of last season, the Jeddah Cornice Circuit was a welcomed site after a disappointing season opener for the Frenchman.  Craving the first points of his short F2 career, the rookie and his Dutch squad, MP Motorsport, were poised to make a statement on the twisty, high-speed street circuit.

Sunny skies and 40km/h winds greeted Clément as he exited the pits Friday afternoon for free practice, where he looked to dial-in his MP Motorsport car for qualifying later in the evening.  After setting the 8th fastest time on his first flying lap, the Frenchman was searching for the limit in the windy conditions when his rears locked, sending him into the pits for a fresh set of tires. While in the pits, the track evolved quickly, seeing his time drop to 18th.  Just as he was about to head back out on track, a competitor hit the wall and brought out a red flag.  After a lengthy delay, green lights finally illuminated with just 13 minutes left in the session, where Clément wasted no time setting a blistering lap time of 1:45.016 – jumping into P5.  Another driver crashed with 8 minutes remaining, bringing a premature end to the session, where Clément’s time would ultimately be 8th quickest.

Qualifying got underway Friday evening just as the sun was setting, with flood lights illuminating the tricky circuit.  Right out of the gates, Clément jumped towards the top of the timing sheets into P4.  On his second push lap, Clément put in personal best sectors 1 & 2, but a car ahead of him caught fire and brought out a red flag before the Frenchman could complete his lap.  Once the session resumed, Clément and MP Motorsport elected to wait in the pits to save their new tires and bide their time for ideal track position.  Their gamble paid off, as another driver crashed bringing out the second red flag of the session with just over 12 minutes to go.  Once the track was clear, Clément was one of the first drivers out – ready to tackle the challenging circuit.  After setting personal best sectors 1 & 2 once again, the red flags waived meaning he had to abort his lap.  Clément had one more chance with 5 minutes remaining to improve his current position of P15, and on his last lap he was able to slot into P12 as the chequered flag waived, placing him in prime position to collect his first points in Formula 2.

Saturday’s sprint race brought news that multiple drivers had been penalized following the end of qualifying; including Clément where he would start from P15.  The weather was sunny, with a strong 25km/h wind blowing down the main straight.  As the lights went out, the Frenchman was able to make a pass coming out of turn 1 to secure 14th position before a safety car slowed the field on lap 2.  As soon as the safety car dove into the pits on lap 7 for green flag racing, two drivers behind Clément had a big crash – immediately bringing out the safety car for the second time.  After spending 7 laps behind the safety car as the damaged cars were cleared off track, racing resumed on lap 14 with Clément still in P14.  The rookie was able to gain on the drivers in front, while separating from the pack behind, inheriting P13 when a driver spun and brought a virtual safety car on lap 18.  Racing resumed on the final lap, seeing Clément finish the sprint race in 13th position after only 7 laps of green flag racing.  Clément’s penalty from qualifying was only for the sprint race, so he would start from 11th position for Sunday’s feature race.

The sun was shining and the wind was gusting for Sunday’s feature race, seeing Clément starting from 11th on the grid due to another driver receiving a penalty.  The Frenchman was one of a few cars running on an alternate strategy, with his team choosing to start on the medium tires.  As the lights went out for the start of the race, Clément immediately lost 2 positions due to the harder compound on his tires, where lap 2 saw him drop another position when he was squeezed out of turn 2.  The rookie was able to fight back, picking up P13 on lap 3 – climbing further up the field as the majority of the grid starting pitting from lap 7 onwards.  Clément was in P2 by lap 11, when a tense battle ensued with the car behind him.  Eventually falling into the grasps of DRS on lap 17, Clément had gone through his medium tires and dove into the pits for a change to the softs.  Unfortunately, he was in P15 by the time he exited the pits, when he found himself in a fierce battle to climb up the grid.  He wasn’t able to properly break-in his fresh tires as he was fighting to get around the slower drivers, ultimately taking away any advantage to jump up the field.  Lap 20 saw him make an overtake to claim 14th, where he would finish the race without finding any more pace.

The first two rounds of Clément’s 2022 F2 campaign have yielded him no points, frustrating the rookie as he knows there is more pace to find in his MP Motorsports car.  He looks to recharge the next two weeks before in-season testing from 12-14 April in Barcelona, Spain, where Clément will focus on his qualifying pace and tire management.  Round 3 of the championship heads to Italy immediately after the test – taking on the famous Autodromo Internazionale Enzo e Dino Ferrari in Imola, Italy.

“This weekend didn’t go as I had hoped.  Pace was good in practice, but I need to find more qualifying pace to set myself up better for the races.  Saturday’s race had no real opportunity to pick up positions due to the amount of time spent behind the safety car, and Sunday I didn’t deliver.  I will use the time at Barcelona testing to regroup with my team, and come back stronger at Imola next month.”