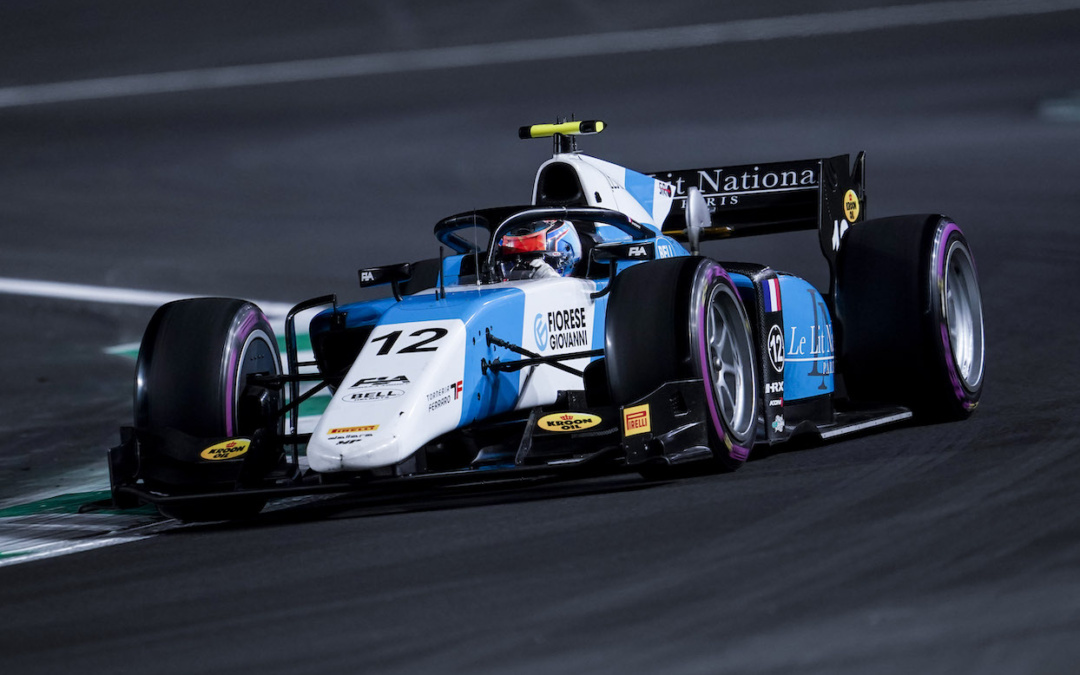 FIA Formula 2 headed to the Arabian Peninsula this weekend for a highly anticipated double-header to close out the 2021 championship season – stopping first in the Saudi Arabian port city of Jeddah, located on the Red Sea.  Making his debut in the F2 championship, Clément Novalak arrived to the brand-new Jeddah Corniche Street Circuit eager to learn as much as possible before his full-time campaign in the championship next year with Dutch Team, MP Motorsport.  Clear, calm weather was a fixture over the weekend, giving Clément the perfect conditions to learn his new MP Motorsport machine.  With only simulator data on the new track, every second behind the wheel was important for the F2 rookie.

The race weekend started with free practice Friday afternoon, where Clément used 17 laps to fine-tune his new car, as well as the idiosyncrasies of the super-fast Jeddah Corniche Street Circuit.  Quickly coming to grips with his new car, Clément was 10th fastest before a red flag waived due to another driver stopped on track.  Shortly after the stopped car was cleared, Clément managed another quick lap, seeing him remain towards the top of the timing sheets before he used the remaining time in the session for race-pace and tire management, seeing Clément finish the session in P16 with a time of 1:44.105.  As the sun set later in the evening, the lights lit the circuit for qualifying, where the rookie wasted no time setting a quick lap, putting himself in P5.  After his second flying lap, Clément headed for the pits to change his tires while comfortably in P8.   After a tire change, Clément headed back out with 10 minutes to go, improving his lap time to 1:41.890, which was good for P12 & fastest of the other 3 rookies competing this weekend, securing a great starting position for the races.

Saturday afternoon brought the first of 2 sprint races, seeing Clément starting from 12th on the grid.  As the lights went out, Clément had a slow start, dropping him back a couple of places before the first corner.  Coming to grips with his car after 2 yellow flags, Clément was busy defending in P15 on lap 8 of 20, trying his best to keep his position.  Eventually succumbing to the charging car from behind on lap 11, the Frenchman continued fighting to not lose any more positions.  After more battles and a long virtual safety car, Clément wrestled back two positions to finish in P14.  Clément’s first FIA F2 race proved to be difficult, but he was able to minimize the mistake at the beginning of the race to finish only two positions back from where he started.

Arabian nights brought cool weather for the second sprint race later Saturday evening under the lights of the street circuit.  After the first sprint race, Clément worked with his engineers to find the optimal way to get his MP Motorsport car off the line quickly.  Utilizing the knowledge gained from his meeting, Clément was able to shoot off the line as the starting lights went out, immediately jumping 3 positions before the first corner.  Unfortunately, Clément locked his rear brakes on the sandy inside lane, losing control and contacting the driver in front ending his race.  Even though this was not the result he wanted, Clément hope to use that experience in Sunday’s feature race where he started from P15 after a 3-grid penalty.

Sunday’s feature race was supposed to begin as the sun went down, however repairs to the barrier delayed the start.  Clément wasn’t able to partake in the formation lap, as his car stalled, so he would have to begin the grand prix from the pit lane.  As the lights went out, there was a massive accident involving a stopped car on the grid, bringing out a red flag and another lengthy delay to the race.  The race would eventually begin again under the safety car, with Clément bringing up the rear in P20.  By the end of the first lap, Clément had already picked up a position, and was fighting for another when 2 cars in front brought out the safety car, and ultimately a red flag and the premature conclusion of the race.  Clément  ultimately finished in P18 after only 6 laps around the Circuit.

Clément’s start to his F2 career was not as he envisioned, but he will use this experience to gain knowledge and build confidence as he continues the road to F1.  Next weekend, the final round of the 2021 FIA F2 championship season will be held at Yas Marina Circuit in Abu Dhabi, U.A.E. – followed immediately by the post-season F2 test, where Clément will log more valuable time behind the wheel of his MP Motorsport car.

“Tough weekend, but plenty learnt for next week in Abu Dhabi.  The circuit was an absolute joy to drive – filled with a combination of fast, high-speed corners making it exhilarating.  First steps are now completed in Formula 2, so I’m looking forwards to Abu Dhabi to gain more experience ahead of the post-season tests before heading into next year.”