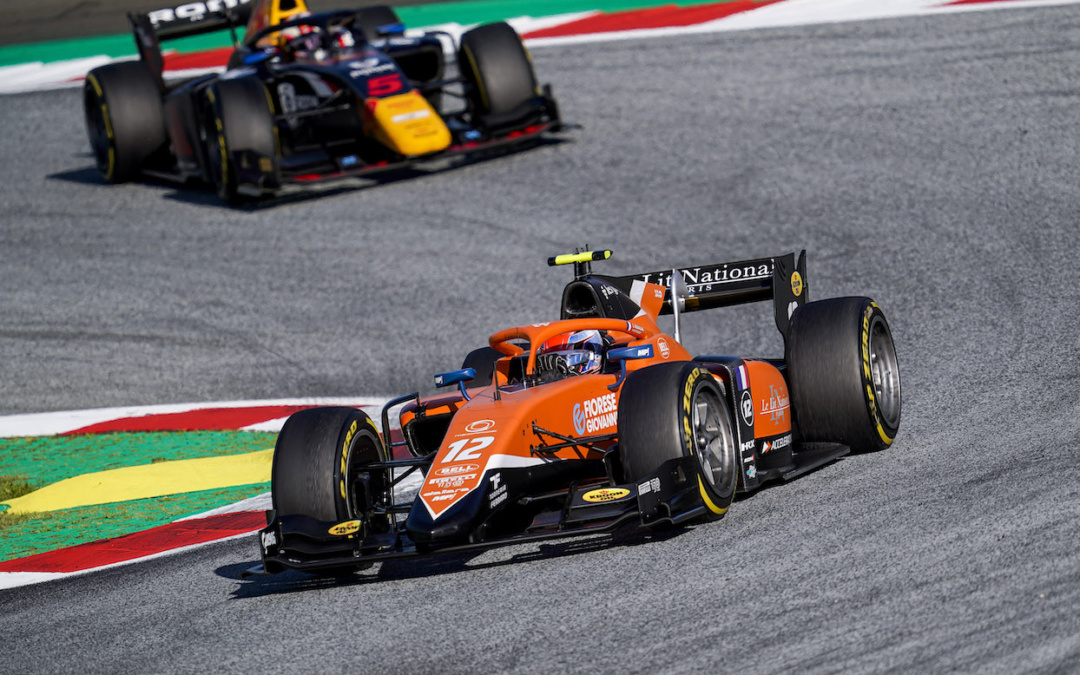 The FIA Formula 2 Championship returned to the heart of the Austrian Styrian hills this weekend, seeing the Red Bull Ring in Spielberg play host to Round 8 of the 2022 season.  Heading into the second half of the season, Clément Novalak was eager to get his rookie campaign back on course after showing strong pace at Silverstone.  A change in weather during the weekend brought an additional challenge to the Frenchman, proving qualifying and tire strategy would play a key role on his pursuit for points.

Sunny skies and cool temperatures graced the circuit Friday morning for free practice to open up the race weekend.  Immediately pushing to find the limits, Clément would set the tenth fastest lap once the session got underway.  Continuing to find the pace, the Frenchman would be in P5 with a lap time of 1:16.793 after his fourth flyer before heading to the pits for minor adjustments and a fresh set of medium compound Pirelli’s.  Feeling confident after a strong first half to the session, Clément headed back out on track with 20 minutes remaining to improve on his time.  Lighting the timing screens on his first flyer out of the pits with a blistering first sector, another driver went off track and got stuck in the gravel, sending Clément back to the pits when the red flag waved.  By the time the track went green again there was only enough time for two push laps, with the Frenchman unable to improve on his time of 1:16.793 from earlier in the session, seeing him finish in P21 after rounding the Red Bull Ring twenty-one times.

The Sun brought warmer weather and 40-degree track temperatures later Friday evening for qualifying, seeing freshly laid rubber after F1 free practice.  The short length of the Red Bull Ring would mean every fraction of a second would be massively important, and minor changes to the car could produce big differences in time.  Clément would set the seventh fastest time on his first push lap, but track limits negated his time.  On his second lap, he found himself in P17 after a time of 1:15.948.  Unable to improve on his third lap, Clément would return to the pits for fresh super soft rubber and tweaks to his MP Motorsport car.  On his first lap out of the pits, he found time in every sector, and would improve to P15.  On his final push lap, he found more time, but the Frenchman’s car still didn’t hook-up in every corner.  With his best time of 1:15.123, he found himself just one second behind the pole-sitter, but with the competitive grid on such a short circuit, he would qualify in P20.

The sun would shine all day on Saturday going into the evening’s sprint race, seeing warm temperatures heat the circuit to 32  degrees.  After a driver was given a penalty for an incident in the last round at Silverstone, Clément would start from nineteenth on the grid.  The Frenchman would have his signature lightning-fast start as the lights went out, seeing him move into P18 before the first corner, but fierce on-track battles throughout the first lap would drop him to P20 as the second lap started.  He would battle for the next twelve laps, until he was able to finally clear the driver in front who stopped on track with mechanical problems bringing out a virtual safety car.  Racing would return to green with just fifteen laps to go, with Clément finding himself at the rear of a massive DRS train for the next several laps.  He was able to make the pass to P18 with just eight laps remaining in the race, seeing him continue to charge up the field to P17 a few turns later.  Able to fend off the driver behind for the next few laps, Clément moved into P16 with two laps remaining, and would finish in P15 when the driver in front was penalized for impeding track limits.  Another error-free race for the Frenchman, seeing him gain four positions after a difficult first lap.

The sun retreated for Sunday morning’s feature race, seeing a damp track after rain overnight.  Clément and his team decided to start on wet-weather tires, even though the track was rapidly drying and other drivers starting on the super soft slick rubber.  The strategy seemed to pay off as the lights went out, seeing Clément surge up the field on the opening lap.  The drivers on slicks were struggling, and Clément was up five positions into P15 by the end of the second lap when a safety car was deployed due to a car stopped on track.  The circuit continued to dry as the cars rounded the circuit three times under yellow, seeing racing resume on lap five.  Clément wasn’t able to hook up his wet tires when the track went green again, and quickly dropped down the field.  By the end of lap five, the Frenchman was struggling with his tires and had lost all progress made on the opening lap, seeing him back down to P20.  In order to avoid a second pit stop to change tires, his team left him on the wet tires until lap seven to make his mandatory pit stop to change to medium compound slick tires.  He would remain in P20 for the majority of the race, unable to find the pace to attack the drivers in front, ultimately finishing P18 after two drivers faced time penalties for impeding track limits.

Qualifying continues to hamper Clément’s pursuit for points during his rookie campaign.  Multiple overtakes and an error-free sprint race were the highlights of another difficult weekend for the Frenchman.  Clément looks to adjust his race week preparation & structure heading into a short two-week break before racing resumes again for his home race at Le Castellet, France from 22-24 July for Round 9 of the 2022 FIA Formula 2 Championship.

“A weekend to forget.  I never felt confident with my car, and wasn’t able to get the most out of it during practice & qualifying.  Starting from the back of the grid makes it extremely difficult to score points, so I need to look at my entire program to see where I can make positive adjustments to set myself up for success.  I will recharge and reevaluate the next few weeks before my home GP in France.  Although I’m not happy with the last few weekends, I very much look forward to Paul Ricard where I hope to turn my season around.”