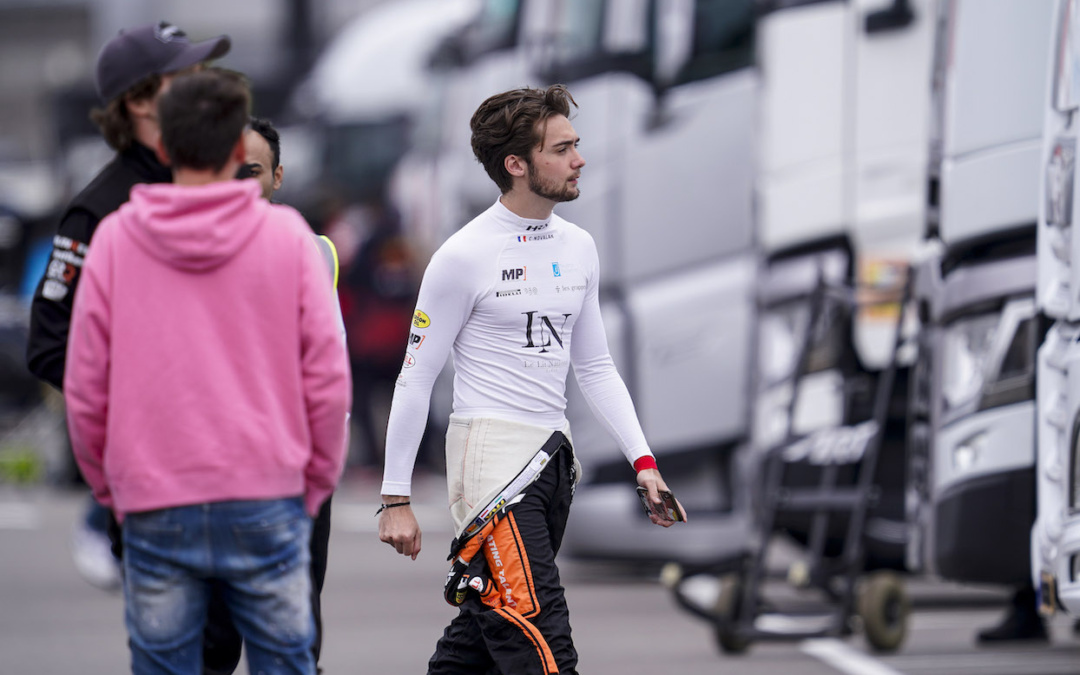 The FIA Formula 2 championship headed to the United Kingdom this weekend, seeing the historic Silverstone Circuit play host to Round 7 of the 2022 season.  Known for high-speeds and sweeping corners, Silverstone has proven to be a successful circuit for Clément, seeing past wins during his 2019 British F3 Championship season, as well as a 2nd place finish on his debut FIA Formula 3 season in 2020.  The Frenchman arrived with high hopes of turning his 2022 campaign around, looking to utilize his knowledge of the circuit to his advantage.

The race weekend commenced Friday morning for free practice, with threatening clouds and a chilly temperature of 17  Needing to dial in his MP Motorsport car before the rain came, Clément began his push laps straight out of the gate with a time of 1:45.295.  Looking to find the limit, he improved on his time during his fourth push lap by almost three seconds, slotting into 11th place.  After 10 laps, it was time to head to the pits for small adjustments and a set of fresh Pirelli hard tires.  Once he parked his car, the rain began to fall, catching another driver of guard, sending him into the wall which brought out a red flag.  After a lengthy delay to clear the wrecked car, the track went green with only seven minutes to go.  Clément headed out to see if the setup changes were beneficial.  He improved his time to 1:42.060, shortly before another red flag was waived, ultimately bringing a premature end to the Frenchman’s free practice after completing thirteen laps around the British circuit.

Later Friday evening, Qualifying brought 25 KM/H winds and sunny, 18-degree weather.  Electing to save his Pirelli soft tires during free practice, this would be the first time Clément would go out on track with the different compound.  After his first lap was deleted for leaving the track limits, Clément struggled to come to grips with the softer tire compound.  Searching for the limit on his second push lap, he set a time of 1:40.740 before heading to pitlane for a set of fresh tires and minor adjustments to his car.  With eleven minutes left in the session, the Frenchman returned on track with enough time for two more push laps.  Setting green first and second sectors, Clément was on pace for a rapid lap, but a yellow flag waved in sector 3, requiring the Frenchman to ease off the throttle.  On his second and final push lap, he eclipsed the 1:39 mark, but was still a second behind the pole-sitter.  A disappointing qualifying session, with his time of 1:39.937 ultimately good for 18th quickest.

Saturday evening’s sprint race was preceded by a day of rain, leaving the circuit soaked and the need to race on wet-weather tires.  Starting from seventeenth on the grid as a competitor withdrew from competition due to health issues, Clément would have to be aggressive to reach the front of the field.  Starting behind the safety car, Clément decided to bide his time and conserve tires while the track began to dry.  On lap six, the Frenchman started his attack, quickly picking off the drivers in front.  For the next few laps, Clément would drive a mistake-free race, climbing to P13 while stretching the gap to four seconds to the drivers behind.  On lap 14, the Frenchman joined a four-car pack fighting for position.  The track was quickly drying, seeing Clément going off-line to try and cool his over-heating tires in any wet patch he could find.  With fading tires, Clément dropped back to P13 on lap 19, where he would cross the finish line as the checkered flag waved – a valiant effort after a disappointing qualifying the day before.

The sun returned for Sunday morning’s feature race, seeing Clément start on soft tires in P17.  As the lights went out, the Frenchman shot out of the gates like a bullet, picking up multiple positions before the first corner.  Midway through the opening lap, Clément had already gained six positions when a massive accident with two cars brought out the safety car, which lasted for a few laps.  When racing resumed on lap 5, Clément made a great overtake to claim P10, where he would remain until his team called him in for fresh hard tires.  The undercut was the strategy, seeing Clément emerge from the pits in P17, and he would jump to P14 by lap 11.  For the next 10 laps, Clément drove an error-free race, and was able to pull away from the pack behind while sticking like glue to the driver in front.  When the drivers on the alternate strategy finally pitted to change to soft tires, Clément was up to P10, but was quickly losing his tires while trying to get around the driver in front.  Lap 27 saw him drop positions when the drivers on the alternate strategy began to charge through the field with fresh soft tires, proving the undercut was unsuccessful.  With no chance of keeping them at bay, Clément would ultimately finish the race in P13.

Clément showed strong race pace all weekend, picking up eight positions with error-free driving, but was unable to come away from Silverstone with points to show for it.  With half the season now complete, qualifying continues to put the Frenchman on the backfoot.  Red Bull Ring is up next, a very familiar track for the Clément, where he looks to find the pace on the onset to put himself in position for success.  Round 8 is this weekend, 08-10 July, kicking-off the second half of the 2022 FIA Formula 2 championship.

“After a disappointing qualifying, I feel like my weekend was quite good all things considered.  I had great pace for both races, and just missed out on points in the feature race.  Looking forward to Austria next weekend.  Red Bull Ring is a great track where I feel very comfortable – I just need to have a strong qualifying to set myself up for success.”