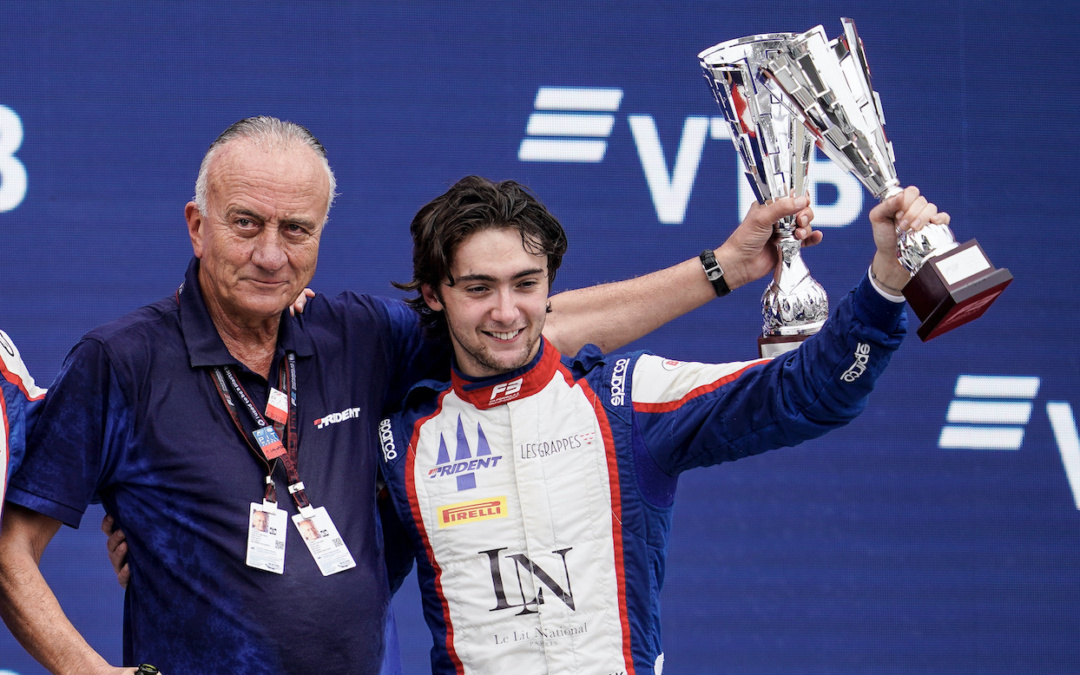 FIA Formula 3 headed to the shores of the Black Sea this weekend for the final round of the 2021 Championship in Sochi, Russia, where inclement weather proved to be a deciding factor in a hard fought, incredibly competitive season.  Arriving to the Sochi Autodrom in third place of the closely-contested drivers’ championship, Clément Novalak craved to close out his second FIA F3 campaign in the best possible position, just 28 points behind second position in the standings.  Clément’s team, Trident Motorsport, entered the weekend in second position of the teams’ championship, adding additional pressure to the shoulders of the young Frenchman to help secure the 2021 teams’ title for his squad.

Clear, mild weather greeted the track to open up the race weekend on Friday, giving Clément an opportunity to perfect the set-up of his Trident machine.  Fifteen minutes into the session, a blistering lap propelled him to the top of the timing sheets.  The track would progress throughout the remainder of the session, with traffic impeding meaningful progress during his final flying lap, Clément would finish the session in P6, only .333 seconds off the top time.  The sun graced the circuit for qualifying, where Clément wasted no time trying to get a prime spot on the grid, setting the fourth fasted time on an early flying lap.  After a tire change, he headed back out for a final lap and was able to improve where many couldn’t.  With a mighty purple-sector on his final flying lap, Clément secured P2, just .134 seconds behind the leader, setting him & Trident up for a spectacular weekend.  As there was inclement weather forecasted for Saturday, the Sporting Director decided to bring forward race 1 to Friday evening, a just a few hours after qualifying was finished.

With minimal rest & time to strategize for the rescheduled first race of the weekend, Clément was a driver on a mission starting from P11 in the reverse grid race 1 later Friday evening.  On the opening lap, Clément had already made 4 overtakes and found himself in P7, a remarkable start when the stakes were so high.  After making another overtake a few laps later, Clément needed to make up time to reach the drivers in-front, and in short order making the overtake on lap 10 to claim P6.  Clément wasn’t finished charging through the field, and quickly secured P5 on the following lap, but was over 3 seconds behind the next group of cars ahead.  Clément continued to push forward, setting the fastest lap of the race on lap 13, and was able to make the overtake and secure P4 on lap 19 as the sun was setting.  Scoring 10 points in the opening race of the weekend was magnificent, and Clément was able to close the gap to P2 in the drivers’ standings with two races remaining.

The weather took a turn for the worse overnight, continuing into Saturday with constant rain, and moments of torrential downpour with flooding in the paddock.  After much deliberation, it was deemed necessary to cancel race 2 without a chance to reschedule – hindering the progress that Clément was able to make the day before in both the drivers’ and teams’ standings.

The skies cleared for Sunday’s final race of the 2021 season, seeing Clément start from P2 on the grid.  After a great start, Clément was able to stay close to the leader, and remained in a tight battle for the entirety of the race.  While Clément was faster, the leader was making it extremely difficult to pass, and competitors were able to close the gap from behind.  Clément saw his opportunity on lap 17 to make the overtake for P1, however as the wheel-to-wheel action continued, he found himself in the marbles on the outside of turn 3.  Not wanting to risk crashing and losing out on the teams’ championship, Clément wisely let-off to fall back to P2.  On the following lap, Clément would be passed and would settle for P3 as the checkered flag was waived.  Clément claimed his 4th podium of the season, 3rd place in the final drivers’ championship standings, and helped his team secure 1st in the teams’ championship – a thrilling ending to an incredible, closely-contested 2021 season.

“It was a great weekend which brought mega points, and am very pleased to finish the season in 3rd of the drivers’ championship.  I had strong pace all weekend, and If race 2 wasn’t cancelled I am sure the battle for second in the drivers’ championship would have been very close in the end.  I’m also thrilled to take home the teams’ title for everyone at Trident.  We had a great season, and everyone worked tremendously hard all season, improving every step of the way.  Overall I am very happy, and am looking forward to what the future may bring.”