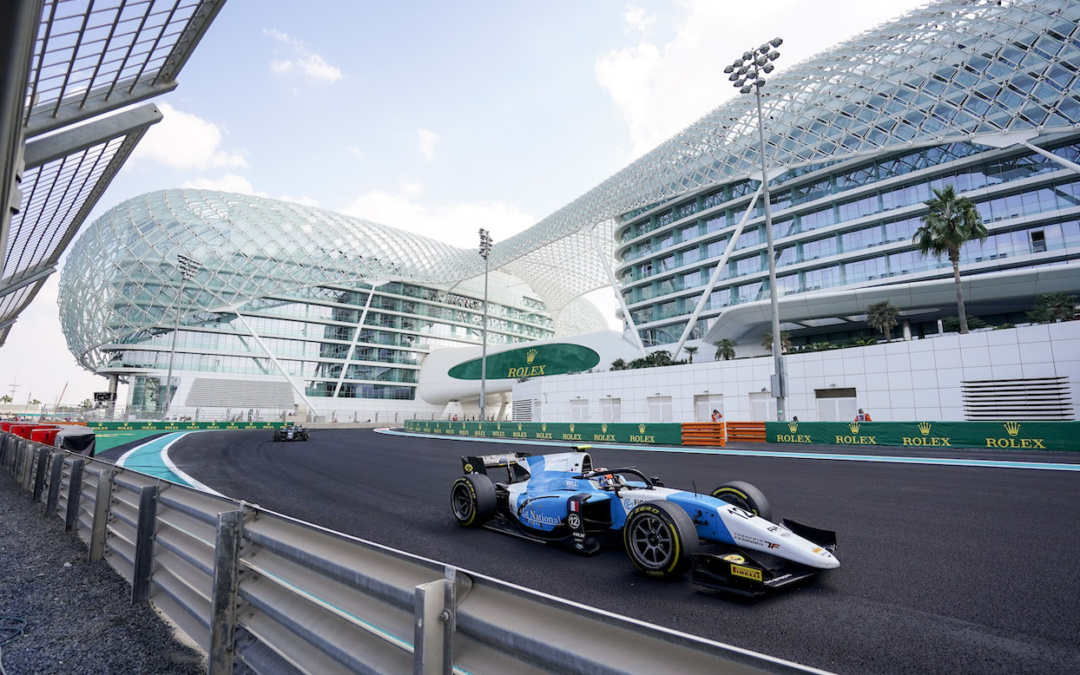 FIA Formula 2 remained in the Arabian Peninsula this weekend to close out the 2021 championship season, taking on the Yas Marina Circuit in Abu Dhabi, United Arab Emirates.  Fresh off a challenging start to his F2 career, Clément Novalak looked to take advantage of another race weekend to build more experience behind the wheel of his MP Motorsport car ahead of the F2 post-season test, and the 2022 F2 championship season.

Steady, clear skies graced the circuit for the entirety of the race weekend, which began Friday afternoon with free practice, where Clément wasted no time trying to dial in his MP Motorsport car.  After everyone’s first flying lap, Clément was in P9, working on the perfect set-up for Yas Marina Circuit.  Clément’s improvements continued, and he was able to set a time of 1:37.315 – good for P5 in the session, only .515 seconds back from the quickest time.  As the sun set later in the evening, the lights lit the circuit for qualifying.  The rookie was on a quick lap, but locked-up going into turn 14, finishing the lap in P10.  Clément was able to improve on his time throughout the session by almost a second, however as the checkered flag waived his best time of 1:36.722 was only good for P20 on the grid.  Clément shifted his focus back to the weekend’s 3 races and his race-pace, trying to get to grips with his new car and new series in preparation for the 2022 F2 championship season.

Saturday afternoon brought the first of 2 sprint races, seeing Clément starting from 20th on the grid.  As the lights went out, Clément had a great start, overtaking the driver in front.  Battling for position for the next few laps, Clément would finally settle into P19 by the end of lap 3, where he would remain for most of the race.  On lap 17, two drivers in front needed to pit, so Clément would pick up two more places, ultimately ending the race in P17.  Clément would finish a full 12 seconds ahead of the driver behind, and only 3.5 seconds from the driver in front, showing improvement in his race-pace, and the ability to stay out of the grasps of DRS.  There would be a 5-hour break until the next F2 race later in the evening, giving Clément and his Engineers ample time to go over the data and prepare for sprint race 2.

Yas Marina Circuit glistened under the lights for Saturday night’s sprint race 2, where Clément would start from P17 on the grid.  As the green flag waved, a chaotic first lap ensued in front of Clément, having cars going four-wide into turn 6, and bunching up the drivers behind.  Able to emerge from the first few laps unscathed in P19, a predictable safety car appeared on lap 4 after two cars in front were involved in an incident, which lasted until lap 7.  Immediately after the green flag waved for the second time, another incident occurred with Clément now in P18.  After a few more laps under yellow, racing would finally resume on lap 11.  Clément would pick up some more positions as the race went on, and found himself in P15 on lap 20.  Feeling more confident with the car, Clément suddenly gained great race-pace, hunting down the drivers in front, making another overtake on lap 21.  Just as the Frenchman caught the next driver, the checkered flag waved, seeing Clément finish in P14 – just .400 seconds behind the driver in front.

Sunday’s feature race started with Clément on an alternate strategy with the medium tire in P20, and he quickly gained multiple positions on the opening lap before a safety car was brought out due to a spin from his teammate in-front.  When the race turned green on lap 5, Clément was comfortably in P13 as he fought to gain more positions.  The drivers in front who were on the super-soft tires had to pit on lap 9, seeing Clément jump to a race-high P6, where he would remain until he had to pit to change his tires on lap 24.  Rejoining the race in P18, the Frenchman continued with great race-pace to climb back up the field, putting in a purple last sector, and briefly holding the fastest lap of the race.  Ultimately finishing in P14, Clément completed the final race of the season by making multiple overtakes, and driving a mistake-free race – an ideal end to the start of his F2 career.

Round 8 proved to be a massively beneficial start of Clément’s F2 campaign, as he showed steady progression throughout the race weekend.  Going according to plan, the Frenchman was able to gain invaluable experience behind the wheel of his MP Motorsport F2 car, learning critical information giving him important knowledge ahead of his first full-time campaign in the series next year in 2022.  Clément will be participating in this week’s official post-season test in Abu Dhabi from 15-17 DEC to close-out his 2021 race campaign.

“Although I didn’t score any points this weekend, I learned a great amount throughout these races.  We’ve made a lot of progress since Jeddah, and my pace in the feature race was very good.  I’m proud of the improvements we made in such a short period of time, so I am feeling positive going into the post-season test this week.  Much more work to be done to fine tune the car and build on my knowledge so we can start the 2022 F2 season as strong as possible.”