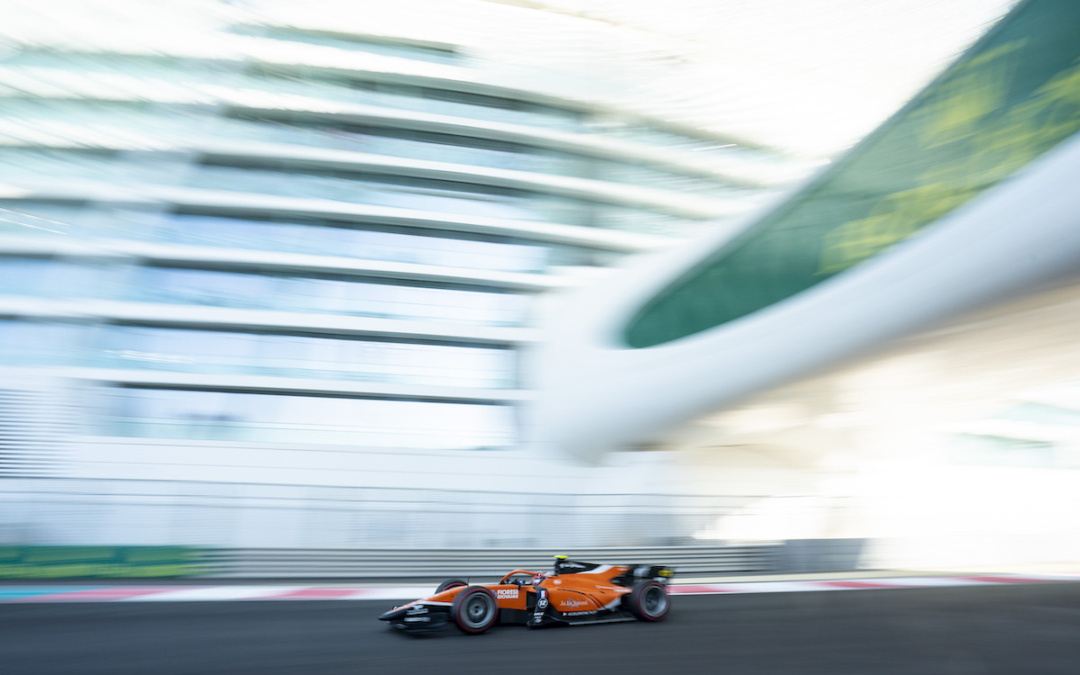 FIA Formula 2 headed to the Arabian Peninsula this weekend to close out the 2022 Championship season.  Clear skies graced Yas Marina Circuit in Abu Dhabi, United Arab Emirates for the duration of the race weekend, seeing perfect weather for the season finale.  After a season of both highs & lows, Clément Novalak arrived eager to end his rookie F2 campaign on a high – with the main goal of helping his team MP Motorsport secure the 2022 F2 Teams’ championship.

Friday’s practice session opened up as the late morning sun baked the circuit to 44 degrees, seeing Clément waste no time in trying to dial in his #12 MP Motorsport car as he set the tenth quickest time on his second lap.  With no improvement during his third push lap, the Frenchman would head to the pits for minor adjustments.  Straight out of the pits, Clément lit-up the timing sheets with a purple last sector, and a blistering time of 1:38.417 – good for second fastest.  As he was entering pitlane for fresh Pirelli medium tires, the session was red-flagged due a driver hitting the wall.  With just three minutes remaining, the track was finally cleared and there was enough time for one flying lap. with Clément improving his first and second sector, but ran into traffic in the final sector.  His time of 1:38.417 would be good for sixth fastest of the session, a great start to the final race weekend.

The sun would continue to shine for the rest of Friday, seeing Clément waste no time getting out on track for the afternoon’s qualifying session.  Feeling confident after a positive free practice, the Frenchman would jump out of the gates on his first push-lap, setting the eighth quickest lap with a time of 1:37.654.  He would find time on his second push-lap in the first and second sectors, however the Frenchman was struggling to hook-up his car in the final sector, so he would return to the pits for new Pirelli soft tires.  With ten minutes remaining, Clément would head back out on track, hoping the adjustments made to his car and his fresh tires would make the difference.  He would improve to 1:37.248 on his first lap out of the pits, but needed to find more time.  On his final flyer he would improve further, but his time would ultimately be deleted for track-limits.  His lap of 1:37.248 would only be twentieth fastest – proving a frustrating final qualifying session of the season.

Saturday evening’s sprint race would see the Frenchman’s signature lighting start & race-craft displayed all season.  As the lights went out, Clément would immediately rush through the field, picking up multiple positions before an accident involving drivers in front would bring a halt to his charge.  By the time the dust settled, a lengthy red flag would suspend the race as repairs were needed to be made to the effected TecPro barrier.  After a thirty-minute delay racing would finally resume, seeing the Rookie up four positions to P16.  Clément would bide his time & save his tires after the restart, expertly choosing the right moments to pressure the driver in-front.  After a long battle, the Frenchman would secure P15 on lap twelve, and begin his charge to the next pack of drivers three seconds ahead.  Just two laps later, Clément would already be within DRS range, and would begin another battle for several laps.  On the penultimate lap, the Rookie would make his move and secure P14, where he would finish as he crossed the line a lap later.

Sunday morning’s feature race would see Clément starting from P20 on the alternate strategy, so tire management would be key for the Frenchman as he would need to extend his first stint, while trying to stay competitive with the soft tire runners.  Enjoying another quick start once the lights went out, Clément would dart through the field; picking up four positions before the end of the first lap.  The Rookie would then begin excellent tire management while staying within DRS range of the drivers in front for the next several laps.  By lap nine, the drivers on the soft tires would begin their mandatory pit stops, seeing Clément driving a steady race in P7 a few laps later.  He would make the overtake into P6 on lap seventeen, with his team calling him into the pits on lap twenty-one to undercut the other drivers on medium tires.  He would exit the pits in P19, when the rest of the alternate strategy drivers starting pitting.  The undercut worked brilliantly, seeing Clément hook-up his fresh soft tires to prime temperature as others struggled with theirs.  The Frenchman would surge through the field during the final laps, seeing him set the fastest lap three laps in succession, and go from P18 to P15 in just three laps.  On lap twenty-eight, he would make a double overtake to P13, and on the final lap he would make the pass to his finishing position of P12.

Clément Novalak’s weekend proved to tell the tale of his rookie FIA Formula 2 campaign – incredibly strong race-pace, showcasing multiple overtakes in both the sprint and feature races, but struggles in qualifying would stall any hopes of points.  Clément is proud to have won his second consecutive Teams’ title; this time contributing to the first Teams’ title for MP Motorsport in F2.  The Frenchman looks forward to continuing his progression in F2, and will have plenty of track time later this week during the FIA Formula 2 official post-season test from 23 – 25 November at Yas Marina Circuit in Abu Dhabi.

“My rookie season in F2 had its highs and lows for sure.  I had excellent race-pace all season, and really enjoyed the challenge of learning the car.  It was a privilege to race with MP Motorsport in my first season in F2, and I’m particularly proud to have contributed to MP’s first Teams’ title.  I look forward to continuing my progression as an F2 driver, and will use the post-season test later this week to fine-tune my racing ability..”